Embers in a Dark Frost Tour and Giveaway 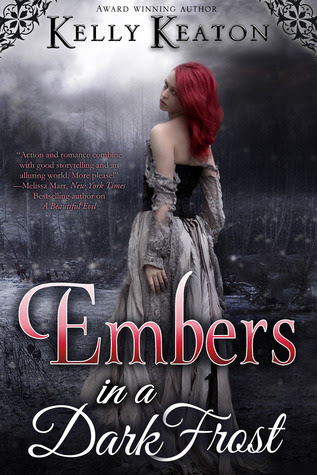 The Fire Breathers have come. The Underworld calls. A choice must be made…

With her feared half blood and flame-colored hair, DEIRA D'ANU is a constant reminder of human betrayal and the war that claimed the light from Innis Fail. Now, darkness and frost creep across the land, strengthening the Lord of the Underworld. War is imminent—an allegiance with the Fire Breathers is vital. When their champion, Balen, sees Deira, he believes she is the key to finding the light and stopping the dark frost....

But the Underworld calls to Deira, tempting her to turn her back on a world that never cared and betray the champion willing to sacrifice everything to keep her safe and save his world from darkness.

Embers in a Dark Frost is such a captivating read! All of the elements were perfectly balanced with a touch of Magic! The writing was wonderful and the story was original. My only gripe about this book was the ending. I need endings, not just an implication. It almost felt like there was to be a sequel to this book.. but I don't know. Cover love and writingI love the cover! It is dark and alluring yet beautiful. The cover model fits the main character. I love the background too! The writing is in the first person POV and is easy to relate to. I love how Keaton stuck with the language of her time period. I also love the fact that Yes was Aye.. even in the romance scenes!Main CharacterDeira is a slave/servant for most of her life. She was a freak, a half-ling. She was powerful thus her people feared her. I was completely drawn to Deira, for she was sad and alone, yet resilient. She had to find herself and follow her destiny. The thing that I liked the most about Deira was the fact that she wasn't the typical stubborn girl. She didn't want to fulfill her destiny, but at the same time she accepted what should be.Swoonworty Points: 8This is a New Adult book, thus there are some NA scenes. Though it took longer to get to the point than I would've wanted, but who wouldn't when Balen was strong and rugged, beautiful and brutal. I liked that the romance was hot while not interfering in the whole story.. it wasn't overwhelming.. it was perfect. This is one story I'd like to see made into a movie, and I don't usually say that. It was short, while maintaining a barrage of information about feelings, setting, and whatnot. I highly recommend this book, if you aren't afraid of a cliffhanger ending!

It seems to be so interesting! I would love to read this book! :)

Great Review. Love the cover too!

I want to read this book! It really does sound good! Thanks for your review. And thank you for a great giveaway!!