Given & Take This Man Blog Tour and Giveaway!! 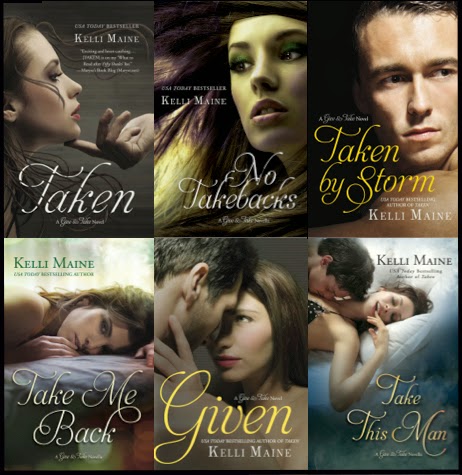 Take This Man
TAKE THIS MAN (Forever E-Novella; $1.99).
It's finally here. After many twists and turns and shocking revelations, it's time for Merrick and Rocha to declare their love for one another in front of their family and friends. And what better place than the historic island where their love first began?


GIVEN (Forever Trade Paperback; $14.00).
For Merrick and Rachael, Turtle Tear Island has become their own private paradise with days of unimaginable bliss and sizzling nights in the bedroom—and beyond. But Rachael and Merrick’s happiness is shattered when his daughter, Nadia, suddenly becomes increasingly demanding of his time and devotion. It soon becomes clear that Merrick will have to make an agonizing choice: the woman whose love saved his tortured soul or the daughter he never knew existed…

Rachel can't stand the thought of losing Merrick after everything she's sacrificed to be with him. She had thought she and Merrick were done with secrets, that the passion that burned so brightly between them had forged an unbreakable connection, but she begins to wonder if she ever really knew the man at all.  Now the love they've fought so desperately to protect may not be enough to save them…
Buy Links:
Amazon
B&N
iTunes


Rachael DeSalvo is haunted by the past. She's come home to her beloved Turtle Tear Island, where she looks forward to happy days and bliss-filled nights in the arms of Merrick Rocha. But when she finds a trunk full of old photo albums and handwritten notes, Rachael soon realizes that the island has not given up all its secrets…

For long before Rachael and Merrick made Turtle Tear Resort their home, this historic island was a haven for sensual, forbidden affairs. As Rachael and Merrick work to restore the grand hotel to its former glory, they will be caught in the perfect maelstrom of conflict and desire.


TAKEN BY STORM (Forever Trade Paperback; $14.00)
Maddie Simcoe knows the devastation that comes from keeping secrets. Now, she's desperate to move on from the heartbreak that almost destroyed her--- trading wild passion that once made her knees weak for a life of comfortable stability. But before Maddie can start over, she must return home to put the past behind her once and for all…

When Maddie blows back into MJ Rocha's life, nothing will stop him from proving to her that walking away from him was the biggest mistake of her life -- not even the engagement ring she wears. Her every look, every touch tells MJ that the fire that once raged between them still burns hot, and MJ won't give up until Maddie gives in to the inferno.

NO TAKE BACKS (Forever E-Novella; $1.99)
The man Rachael DeSalvo loves more than anything is suffering in silence. The grand opening of Turtle Tear Resort should be a time of celebration for Merrick Rocha. But he's suddenly intent on selling off the business he built from the ground up-and Rachael's hell-bent on finding out why. Only one man can give her the answers she seeks, but meeting with him would be the ultimate betrayal to Merrick. Merrick once asked Rachael to trust him against all odds…can he do the same?

TAKEN (Forever Trade Paperback; $13.99)
He steals her away to a deserted island, to the one place she's dreamed of being-the one place she can't go. He's used to buying whatever he wants, but he can't buy her. How can she resist the magnetism of his body, the longing ache deep inside her? She wants him to take her-on her terms. Every attempt he makes to love her only hurts her. How can they go on like this? This is the story of how she was . . .

Although exhausted, I didn’t sleep. While Merrick napped, I got online and looked up as many apartments on Rue Lincoln that rented weekly as I could find. I called the phone numbers listed on the rentals, pretending to be Enzo’s daughter in-law, hoping to find Nadia, but wasn’t having any luck.
I was so focused on my search, I didn’t hear Merrick come up behind me. “You’ll never find them,” he whispered in my ear, making me jump and grasp the arms of the chair.
“God, you scared me.”
He swept my hair to the side and kissed my neck. “If Enzo doesn’t want to be found, he won’t be.”
I closed my laptop. “Then why are we here?”
He traced my earlobe with the tip of his nose. “Nadia will contact me. She’ll tell us where to find her.”
I wanted to believe that. I heard the desperation in his voice. He didn’t want to believe his daughter would betray him and be loyal to Enzo. I hoped for his sake—for all of their sakes—Nadia would get in touch.
Merrick took my hands and pulled me up out of my chair, wrapping his arms around me and holding me against him. “Let’s get out of here and go look around.”
He kissed me. I remembered our first kiss and how I’d been so hesitant, so nervous, but my raw lust for Merrick took over and I couldn’t hold myself back. Now my lust and desire pooled with comfort and love. His kisses made me feel cherished and treasured as well as physically wanted.
It was so clear to me, even though neither one of us had actually spoken the word marriage, that he was my husband. He would be—it was meant to be. I felt the white, hot truth of it in every cell of my body. We were one soul, torn in half and put on earth to find each other.
And there he was, right in front of me. He’d made it happen. He must’ve somehow known deep inside that I belonged with him.
“Why are you staring at me like that?” he asked, a cocky grin forming on his lips.
I rose up on my toes to kiss him again. “Like what?”
“Like you have some dangerous secret.” He pinned my hands behind my back and pressed me into the wall. “Are you keeping something from me, Ms. DeSalvo?”
“Nothing you don’t already know,” I said, smiling.
“And what’s that?” He nuzzled my neck. It tickled and I leaned my head against his, laughing.
“You’ll figure it out sooner or later,” I said, nipping his earlobe. “I’m just giving you time.”
Merrick chuckled and rested his forehead against mine. “Is that so? How much time do you think I need?”
I shrugged playfully, wondering if he knew what I was referring to.
“Maybe you’re the one who needs time.” He winked.
Caught off guard, my pulse quickened. Were we talking about the same thing? Marriage? Why was he giving me time? I was waiting on him. “Maybe I don’t.”
He stepped back and turned me toward the big suitcase, still packed and sitting beside the bed. “Maybe you should change out of that robe and get dressed so we can get out of here.” He smacked me on the bottom to get me moving.
Padding across the plush carpet, I felt my heart sink a little at his dismissal of the conversation we’d been circling so closely. His giving me time sounded like a poor excuse.
I knelt on the floor and began to dig through the clothes I’d brought.

USA Today bestselling author of TAKEN and its sequel, No Take Backs, Kelli Maine watches entirely too much reality TV, which led to her compulsion to write dramatic romance novels. Blessed with a unique ability to bond with difficult people, she's convinced she could win Big Brother. Her deathly fear of heights would keep her from completing half of the detours on The Amazing Race, and she's shocked nobody has ever penned The Survivor Diet Plan: Eat One Cup of Rice for Thirty-Nine Days and Lose Fifty Pounds! Kelli lives in northeast Ohio with her family and a crazy cat that broke into their attic and refused to leave.