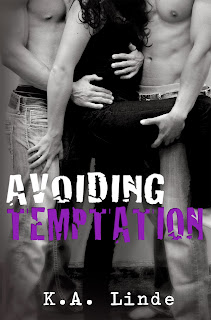 
Two years after walking out of Jack’s wedding, Lexi has finally put her past behind her. She has made up her mind about where her life is headed. This time, she is sticking to her guns, no matter what.

That is, until a phone call shatters the fragile grasp she has on her new life. Lexi is forced to question everything she thought she knew about what she wanted, and life-changing events push her to reevaluate the very plans she holds so dear. Nevertheless, Lexi has to choose her true path. That might just mean deciding, once and for all, that she doesn’t have to answer to anyone but herself.

In this highly anticipated final installment of the bestselling Avoiding series, follow Lexi as she juggles a new career, a new city, and the burgeoning affections of three very different men.

“Into the park,” he demanded, pointing at the entrance.
“Nope.  We should go home now.”
He smiled, clearly contemplating her suggestion.  Then, as she began to drag him back to their cars, he hoisted her up into his arms and carried her into the park himself.
“Oh my God!  What are you doing?” she squealed as he walked forward.
He held her gingerly in his arms as if she weighed nothing.
“I can walk! I can walk!”
“Are you going to behave?” he asked, smirking down at her face.
“Not if you keep carrying me!”
“Then, why would I put you down?”
She threw her head back, exasperated, and he just laughed at her.
“All right, all right.  I’ll put you down.”  He placed her lightly on her feet.
“Thank you,” she said, steadying herself against him in her high heels.  “Can we try to act like civilized adults now?”
“What’s the fun in that?”
“You have a point.”
As they walked farther into the park, the trees began to cluster together, and the city lights gradually disappeared. The characteristic speeding of cars on the interstate and honking of horns in traffic through the commuter city faded away to a dull hum, and they were left with each other. The winding path they had selected was even farther off the beaten track, and Lexi actually noticed that some stars were overhead. The stars had come out for them tonight, like the stars had known they were going to take this moonlit stroll through the city.
The weight of his hand was peaceful against hers, and the sound of each other’s breathing kept a slow, easy rhythm about their movements—so much so, that she hardly realized just how dark it was where they were. They had walked so deep into the woods that even the lights in the park were missing or had been extinguished.
“Hey,” she whispered, not even sure why she was being so quiet.  “It’s really dark out here.  Don’t you think we should go back?”
“Yeah, probably,” he agreed, stopping and staring down at her.  “Let’s just go a little farther, and if we don’t find the other side, we’ll circle back.”
Lexi nodded.
After another minute of walking on the darkened path, they followed a bend in the trail, and suddenly, light illuminated the path before them.
“Oh, good,” she murmured, breathing a sigh of relief.  “We made it.”
He smiled back at her.  “We did.”
Lexi looked into his face and saw a glint of something she hadn’t recognized before. Had she not been looking?  He appeared absolutely ecstatic.  She hadn’t even realized how happy he was and that such a small walk with her could brighten his mood.
Walking forward along the path, Lexi noticed it narrowed as they ventured toward the light.  Her eyes widened as everything came into focus.
No wonder he was grinning like an idiot.
White candles of all different shapes and sizes flickered along the path. Hundreds of them illuminated their way, and she noticed, where she hadn’t before, the streetlights were all still in place but had been shut off to allow the red-and-orange flames to be the only source of light.  He had turned off the world in Piedmont Park to give Lexi one of her own.
She stared forward, perplexed and in awe at what was materializing, as she followed him down the pathway. The candles opened up to a small clearing where a giant blanket was laid out with a picnic basket and a dozen long-stemmed red roses in a clear vase.
“What is this?” she whispered, facing him once more.

K.A. Linde graduated with her Masters in political science from the University of Georgia in 2012. She also has a bachelors in political science and philosophy. She wrote her the Avoiding Series while struggling through advanced statistical modeling and writing her thesis. She enjoys dancing and writing novels that keep you guessing until the very end.

She currently resides in Georgia with her boyfriend and two puppies, Lucy and Riker.