Crazy for You Blog Tour and Giveaway!! 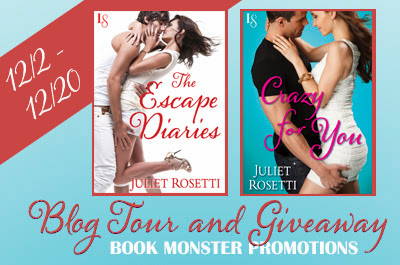 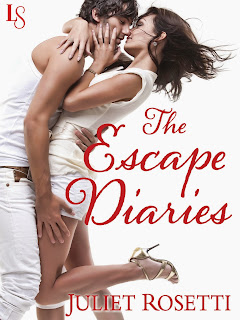 The Escape Diaries: Life and Love on the Lam [reissue]
By Juliet Rosetti
Published by Loveswept
On Sale December 9, 2013

Find The Escape Diaries on Goodreads

Introducing the hilarious new heroine, Mazie Maguire, in Juliet Rosetti’s irresistible debut novel that follows the outrageous adventure of a woman on the run.

Wrongly convicted of killing her philandering husband, Mazie Maguire is three years into her life sentence when fate intervenes—in the form of a tornado. Just like that, she’s on the other side of the fence, running through swamps and cornfields, big box stores and suburban subdivisions. Hoping to find out who really murdered her husband, Mazie must stay a few steps ahead of both the law and her mother-in-law, who would like nothing better than to personally administer Mazie the death penalty via lethal snickerdoodle. With the Feds in hot pursuit and the national media hyping her story, Mazie stumbles upon a vast political conspiracy and a man who might just be worth a conjugal visit—if she survives. 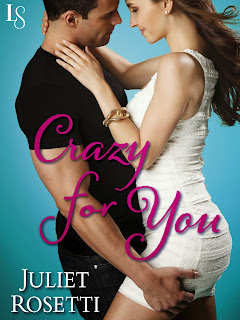 Crazy for You: Life and Love on the Lam
By Juliet Rosetti
Published by Loveswept
On Sale December 9, 2013

Find Crazy for You on Goodreads

In the tradition of Janet Evanovich and Susan Elizabeth Phillips, Juliet Rosetti ups the ante in her laugh-out-loud funny Escape Diaries series, as Mazie Maguire must use any means necessary to keep her main squeeze out of the slammer.

Once you escape from prison and ride off into the sunset with the gorgeous guy who helped you nail a killer, you live happily ever after, right? Well, not exactly—not if you’re Mazie Maguire, and the flow chart of your life looks like a pinball machine. Mazie has broken up with her guy, Ben Labeck, she can’t pay her rent, her car is infested with mice, and she’s working at a coffee shop where the dress code is teddies, thongs, and toe-cleavage heels. Now Ben is the chief suspect in a murder investigation, and Mazie’s tapping into her fugitive wiles to keep him out of jail. Strictly as friends, she vows. No kissing, no touching, no romance. But how is Mazie supposed to keep her thoughts platonic when her “buddy” is giving her erotic back rubs, and a make-believe-we’re-newlyweds charade puts her in the mood for a wedding night?

CRAZY FOR YOU – EXCERPT

When I’d escaped from prison, my mother-in-law had first tried to kill me with a do-it-yourself home electrocution kit, then had attempted to brain me with a laminated horse hock. Facing charges of attempted homicide, she’d paid a psychiatrist to have herself declared non compos mentis and get herself committed to a velvet-lined loony bin. Since she was immune from legal proceedings as long as she was locked in the Ralph Lauren Institute for the Rich and Deranged, I couldn’t sue her to get my money back. But she couldn’t stay there forever. Someday she’d be getting out. And I’d be ready with my pit bull lawyer.
Until then I was clipping coupons, mining my pockets for stray pennies, and taking home doggie bags. Glancing at the Happy Soup wall clock, I discovered that I was running late. Too bad about my leftover booyah, but a doggie bag just never works on soup. I tossed my iPad into my purse and barged out the door, failing to notice that someone else was entering while I was exiting.
“Oops—sorry,” I said.
I looked up.
Shit!
Of all the booyah joints in all the world, why did he have to walk into this one?
It was Labeck. He was holding open the door for the TV dodo behind him, but he came to a jolting halt when he saw me. We stared at each other. Well, not exactly stared, on my part. Drank in, inhaled, devoured. He was wearing the aftershave I liked, the one that smelled like cinnamon and wood smoke.
“Hi,” he said, looking as surprised as me.
“Hi,” I replied, as a hellish red tide swept from my hairline to my clavicles.
“How’s Muffin?”
“Muffin? Muffin’s good.”
“That’s good.”
“How are you?” I could feel my brain cells committing suicide, one by one.
“Me? I’m good, too.”
Who knows how long this witty repartee might have continued, but the Talent got tired of standing out in the cold and popped up beneath Labeck’s outstretched arm, which had frozen on the door. Looking as though he wished he could vanish beneath an invisibility cloak, Labeck said, “Mazie, this is Aspen Lindgren. Aspen, Mazie Ma—”
“Oh, this little gal needs no introduction.” Aspen smiled a dazzling high-definition-TV-just-out-of-the-box smile and stuck out her hand. We shook. “Maziemania, right? What a fantastic survival story! It’s terrific that you were cleared of those charges that you killed your husband.”
“Thanks.” For remembering to mention it.
To anyone watching, we were just two women making polite chitchat, but we knew better. We were taking each other’s measure. I was the ex-girlfriend and she was aiming for the new-girlfriend slot. Aspen was radiating, showing off for Labeck.
No one was going to outdo me at radiating, dammit! I wasn’t a former Miss Quail Hollow for nothing! I squared my shoulders, lifted my chin, sucked in my gut, thrust out my boobs, and turned up the wattage on my own smile. Labeck looked stunned, as though he’d been hit with exploding estrogen bombs.
“I’ll be sure to watch for your reports from now on,” I said to Aspen, still in the same overdosed-on-cotton-candy tones, resisting the urge to shorten her name to Ass.
“So where do you work, Mazie?” she asked.
“Cromwell Research Services.”
Aspen’s eyes lit up. “The website, right? They run tons of ads on our station. The owner of your company¾Rhoda? Rhonda?—anyway, she invited me and some people from our station to this party she’s throwing tomorrow night. I’m making Benny take me, even though he’s a great big ol’ grouchy bear about parties.”
“Yes, I bet he is.” I bit down on a laugh, noting that a nerve in Labeck’s jaw was twitching. How fascinating. I was almost enjoying this.
“I suppose we’ll see you there,” Aspen chirped.
“Probably.” My jaw muscles were getting sore from smiling.
“Super! Well, if you’ll excuse us, we’ve got to grab a bite and then we’re off to the next crisis. Just rush-rush-rush, all day long, you know how it is with us media folks.”
“Uh-huh. Nice meeting you.” I fled outdoors into the cold, clear air. Tiny black specks boogied across my vision and I suddenly staggered, overcome by dizziness. I was about to fall into the gutter and get run over by a garbage truck.
Aspen would cover the story, of course. “And so ends the tragic story of Mazie Maguire, the woman who murdered her husband in cold blood but later beat the rap.”
I didn’t “beat the rap.” I flushed out the guy who did the actual crime. Thanks mainly to Ben Labeck, who’d hidden me in his apartment. He’d also arranged the setup that nailed the scumbag, despite the fact that he could have been charged with aiding and abetting a criminal. When I’d been released from prison, Labeck had asked me to move in with him. We’d spent five blissful days together, most of them in his bed.
And then, with dizzying suddenness, before I quite comprehended what was happening, we’d broken up, Labeck spinning off to the wilds of Montana and me to the urban wilderness of Brady Street. Six weeks had passed since then. I hadn’t even known Labeck was back in town.
The dizziness passed. I pulled myself together and walked to my car. Milwaukee wasn’t that large; sooner or later Labeck and I were bound to run into each other. Now we’d both survived the encounter. We were getting on with our lives, me with my canine companion, Muffin, and Labeck with his junior Diane Sawyer.
I’m over him, I told myself. I didn’t need Ben Labeck in my life.


One of these days I might even start to believe that.

Juliet Rosetti grew up on a Wisconsin farm. She has taught school in Milwaukee and in Sydney, Australia, where her duties included coaching cricket and basketball. Her work has appeared in The Milwaukee Journal, Chicago Tribune, and in many other publications. She is a past winner of Wisconsin Magazine’s Wordsmith Award for nonfiction. Currently she lives in Oshkosh, Wisconsin, with her husband and son, teaches in the local public school system, and is writing the next book in the Mazie Maguire series.