Then Again Blog Tour and Giveaway!! 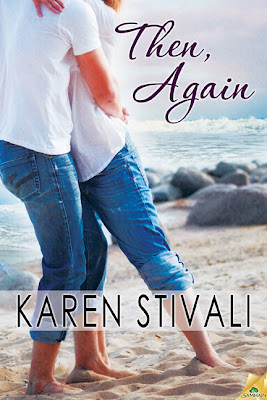 Sometimes you have to lose it all to find what you really need.

Photographer Kay Turner is dealt a double whammy when she flies home for her grandmother’s funeral to find her boyfriend with another woman. Now with two losses to mourn, she retreats to her newly inherited beach house to clear her head.

Everything at the beach is familiar: the sounds of the ocean, the scent of her grandmother’s perfume—and the irresistible smile of James Margolis. The man Kay spent her adolescence pining for is every bit as charming as she remembers.

James always thought of Kay as “a nice kid”, but he feels something very different for the woman she’s become. Especially when he asks if she’d be willing to part with some of her grandmother’s recipes for his new restaurant—and they wind up sharing much more than culinary secrets.

But as their relationship deepens, Kay finds herself caught between the demands of her dream career as a travel photographer, and a chance for happiness with the one man she’s wanted for a lifetime.


Then, Again by Karen Stivali

Then, Again was such a sweet romance! The kind of romance that made your heart happy to read. Karen makes you fall in love with the couple while they themselves are falling in love. They had the right combination of swoon and heat! We won't even think about the weight I gained thinking of the foodie aspect of this book!

I think Karen's writing style was perfect. The characters were well developed, and the flow was easy to read. James and Kay were seriously the cutest couple ever. They had known each other from childhood, and only wanted the best for each other. James was Kay's rock when she was at the bottom. Her grandmother's two best friends Trixie and Rosalie...they were freakin funny!

The story line didn't pack a whole lot of punches but it kept you wanting more. If you want a romance that'll make you hungry for more, yet leave you fully satisfied, this is the book for you!

Karen Stivali is a prolific writer, compulsive baker and chocoholic with a penchant for books, movies and fictional British men. When she's not writing, she can be found cooking extravagant meals and serving them to family and friends, who never seem to mind the excessive quantities she tends to prepare. She attributes her ability to multitask to the fact that she rarely sleeps, which gives her more hours every day. Prior to deciding to write full time Karen worked as a hand drawn animator, a clinical therapist, and held various food-related jobs ranging from waitress to specialty cake maker. Planning elaborate parties and fundraisers takes up what's left of her time and sanity.

Her works of women's fiction, Meant To Be, and its sequel, Holding On, (published by Turquoise Morning Press in August and November 2012, respectively) both made multiple  Best of 2012 lists and are rated as true gems and recommended reads.

To learn more about Karen  and all her upcoming books you can visit her website karenstivali.com where she blogs original recipes, sassy commentary on The Bachelor, and tidbits about her journey in the writing world. Karen can also be found attempting witty banter on Twitter
http://twitter.com/#!/karenstivali

Thanks for sharing this review and post! Great giveaway too!

Thanks for the informative review and great giveaway!

Thanks for the informative review and great giveaway!

Thanks for the giveaway!!!

Can't wait to read Then Again! Thanks for the giveaway and all the best, Karen!

Can't wait to read it!

Can't wait to read this!

Then, Again looks good. Looking forward to reading it. thanks for the opportunity to win a copy :)

I had never heard of this author OR this book before. It definitely sounds interesting and I will be checking out more of her books! Thanks for the giveaway :)

Thanks for the introduction to this author/book and the chance to win!

Sounds like a good book! Thanks for the giveaway!