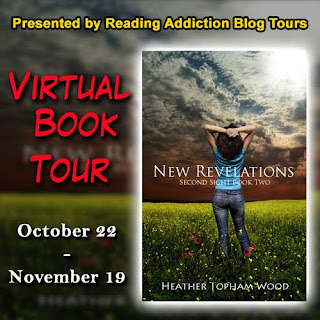 I really think this series is awesome! The second edition of The Second Sight series was just as snarky and amazing as the first. The premise of the book is something that I haven't read, and it truly seems like it is something that could happen in real life. I like the cover, but the books seems more contemporary with a touch of paranormal that I think it would benefit a face lift. The writing is Third Person, which if you read any of my reviews of third person, you'd know that I'm not a big fan.. BUT Woods did an excellent job with it. I could completely relate to the main character.

In the beginning of the book Kate struggled with the fact that she was psychic. She knew she wanted to help others but had no idea how to tap into her talents. After helping save a little boy Kate was plagued with guilt that she couldn't help him sooner. She was also just beginning to accept the fact that Jared, the hot detective was her new boyfriend. Jared was very swoony in this book! He was sweet and accepting of her gift, but he also wanted to take his time and do everything right by Kate.

In the meantime, Kate meets Declan who was full of himself or "cocksureness" according to Kate. Declan was also psychic and he claimed to be able to help her control her visions. The two decide to work together to solve a missing persons case, but it seems that fate may have other plans for the two.

I loved the humor in this series, there were several points that I burst out laughing. I especially gave this bonus points for Julie, Kate's best friend. She is a complete spitfire and here's one of my favourite scenes between the friends:

"I don't know why you even bring that loser up, I heard a rumor that he collects his belly button lint in a jar."

"Julie, you spread that rumor," Kate reminded her matter of factly.

Here's another funny scene from Kate:

"What do you mean you're like me? You're obsessed with the Bachelor and have a fear of public restrooms?"

I really liked this book and I would definitely recommend this series!

Thanks Ashley for taking the time to review New Revelations. You rock =)