The Edge of Never Excerpt and Giveaway 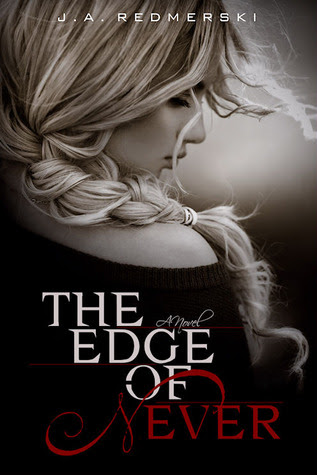 Twenty-year-old Camryn Bennett had always been one to think out-of-the-box, who knew she wanted something more in life than following the same repetitive patterns and growing old with the same repetitive life story. And she thought that her life was going in the right direction until everything fell apart.
Determined not to dwell on the negative and push forward, Camryn is set to move in with her best friend and plans to start a new job. But after an unexpected night at the hottest club in downtown North Carolina, she makes the ultimate decision to leave the only life she’s ever known, far behind.

With a purse, a cell phone and a small bag with a few necessities, Camryn, with absolutely no direction or purpose boards a Greyhound bus alone and sets out to find herself. What she finds is a guy named Andrew Parrish, someone not so very different from her and who harbors his own dark secrets. But Camryn swore never to let down her walls again. And she vowed never to fall in love.

But with Andrew, Camryn finds herself doing a lot of things she never thought she’d do. He shows her what it’s really like to live out-of-the-box and to give in to her deepest, darkest desires. On their sporadic road-trip he becomes the center of her exciting and daring new life, pulling love and lust and emotion out of her in ways she never imagined possible. But will Andrew’s dark secret push them inseparably together, or tear them completely apart?

Due to sexual content and language, this book is recommended for 17+ – Adult Contemporary Women’s – New Adult Fiction


Title: THE EDGE OF NEVER
Author: J.A. Redmerski
Release date: November 15, 2012
Genre: Contemporary Romance
Age Group: New Adult
Goodreads: http://www.goodreads.com/book/show/16081272-the-edge-of-never
Links: Buy links will be available Nov. 15. Please look these up and add to your post.
Special Price: the book will be available at a $1.99 promotional price on the release day only (Nov. 15) and will go to regular price on 11/16.

I pull my hand from his and grasp the fabric above my boobs and pull the top up a little so that it feels better in place.
“I love you in that,” he says, “but you have to admit, it’s a distraction for douchebags.”
“Well, I don’t want to walk all the way back to the hotel just to change my top.”
“No, you don’t have to do that,” he says, reaching for my hand again. “But if you want to go to another club, you’re gonna have to do something for me, alright?”
“What?”
“Just pretend you’re my girlfriend,” he says and a little smile spreads across my lips. “At least that way no one will fuck with you, or they’re less likely to try, anyway.”
He pauses and looks at me and says, “Unless you want guys to hit on you?”
It takes no time at all for my head to start shaking. “No. I do not want any guys to hit on me. Innocent flirting, fine—it does wonders for my confidence—but not douchebags.”
“Good, then it’s settled. You’re my sexy girlfriend for the night, which means I get to take you back to the room later and make you squeal a little.” There’s that boyish grin of his again that I love so much.
I’m tingling between the legs now. I swallow hard and play it off by playfully narrowing my eyes at him.
I’m just glad to see his dimples again, as opposed to that wrathful—although incredibly sexy, still—expression that consumed his features moments ago.
“As much as I like it—well, ‘like’ is really putting it lightly—I’m not going to let you do that anymore.”
He looks hurt and a little shocked. “Why not?”
“Because, Andrew, I…well, I just won’t let you—now come here.” I cup my hands around the sides of his neck and pull him toward me.
And then I kiss him softly, letting my lips linger on his afterwards.
“What are you doing?” he says, staring down into my eyes.
I smile sweetly up at him. “I’m getting into character.”
A grin tugs the corners of his lips. He turns me around and locks his arm around my waist as we head toward Bourbon Street.

Author of THE DARKWOODS TRILOGY and DIRTY EDEN, mother, werewolf & zombie fanatic, book addict and a happy hermit obsessed with the Universe. Oh, and AMC’s “The Walking Dead”.

Addictions: Starbucks every morning, trolling Barnes & Noble’s shelves once a week, detesting winter, shopping flea markets and preparing for the collapse of society as we know it. Do I own a tin foil hat? Maybe. :-)

I was born in Arkansas and have lived here most of my life, except the couple of times when I lived in Pennsylvania. I started my first novel at the age of thirteen and have been writing something ever since. Generally, I love characters in life and on paper. I pay attention to people, especially those whose personalities make them different from the rest of us: the drug addict roaming the Laundromat that talks to himself, the young, inattentive mother in the park with the meanest kid on the playground – (the entire cast of ‘Swamp People’) – characters fascinate me and I hope that it shows in my literary work.

Some authors that inspire me are Neil Gaiman, Anne Rice, Cormac McCarthy, Max Brooks, J.K. Rowling, Richard Matheson, William R. Forstchen, Carrie Ryan, David Moody, Phillipa Gregory and Lisa Smedman. I’m always on the lookout for the next great book to pull me into its world and piss me off when I read the last page and know that it’s over.


Also, almost more than anything I love nature and this beautiful planet that I live on. I just wish everyone else did too….