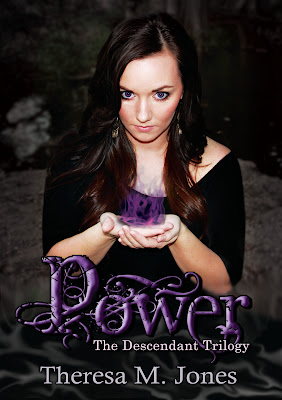 Thousands of years after the battle between the angels, when Lucifer was defeated by Michael in the Heavens, the war is still being fought on Earth by the humans who have their Power, the Angel’s Power.


Allison Stevens is a 21 year old single mother who gets thrown into the middle of this battle when Damien, the Leader of the Rising, decides to hunt her down and kill her because he fears she is the descendant prophesied to save the world.

David, a member of the Order, takes Allison under his wing in order to show her the ropes, and hopefully groom her into being the one they have been waiting for. The only problem is that they start to grow more attached than a teacher/student relationship should allow.


But that isn’t all. Damien wants to open the Seven Seals and bring about the apocalypse and it’s up to Allison to not only save herself and her family, but save the world, all while trying to keep her heart from breaking.


Power has a smoothly constructed flow and the plot is great. I love the main character Allison and her dedication to her daughter. I really felt that her character grew as the story progressed. The whole world and the people that live within it, the powers that some possess entranced me until midnight last night (which is the reason for the mini review.. I had to reread the final draft). Theresa's writing is great.. though I could yell at her for drawing out the suspense to see how the powers evolve. All-in-all this was a perfect short read for any paranormal romance fans!!

About the Author: Theresa M Jones is just a regular small town, Texas girl. When she isn't at work at a local Medical Equipment provider,you can find her at home with her husband and two beautiful (and rambunctious) kiddos.In her spare time- as if there ever was such a thing as "spare time" - she reads and reviews books on her book blog, and writes paranormal romance novels.POWER (The Descendent Trilogy #1) is her debut New Adult (Mature YA) Paranormal Romance novel.

Blog: Keepin Up with the Joneses In the Book World

Thank you so much for participating in the tour! Thank you also for reading and reviewing Power!!!!