The 12 NA's of Christmas- Addison Moore 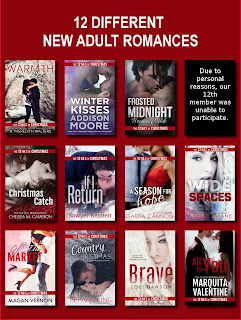 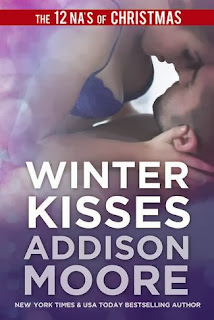 Laney Sawyer used to believe in love and all of the trappings that happily ever after could provide until Ryder Capwell crushed her heart. When Laney is auctioned off as a prize at the drama department fundraiser the last person she expects to trade cold hard cash for her company is Ryder.

Ryder Capwell is in love with Laney Sawyer. One year ago she walked out of his life and took the light of his world right along with her. Ryder would do anything to have another chance with Laney, including purchasing her for the evening courtesy of Whitney Briggs University, and he does just that.

One thing leads to whiskey, which leads to a one-night stand. She thinks it’s revenge sex—he thinks its make up sex. Things can only go wrong from here.

“Capwell”—he gives the ghost of a smile—“Ryder, Capwell,” he rumbles in his deepest octave and my stomach pinches tight. “I’ve always wanted to say that.” He smolders into me without even trying, and good God almighty I’m way past the point of being seduced. It’s obvious this night is going to end with a bang, and now I feel like an idiot for putting myself within shooting, or rather bedding range. Face it. Those cobalt blue eyes of his cast a spell over me, and now, I’m voluntarily striding into his penthouse just hoping for some perversion.
He comes in close, and I’m terrified he’s going to kiss me and we’ll be tearing off one another’s clothes before I even get to berate myself properly for letting my vagina follow his happy trail right to his promiscuous penthouse.


You can buy this book or any of the 12 NA’s of Christmas titles on Amazon.

Addison Moore is a New York Times, USA Today, and Wall Street Journal bestselling author who writes contemporary and paranormal romance. Her work has been featured in Cosmopolitan Magazine. Previously she worked as a therapist on a locked psychiatric unit for nearly a decade. She resides on the West Coast with her husband, four wonderful children, and two dogs where she eats too much chocolate and stays up way too late. When she's not writing, she's reading.