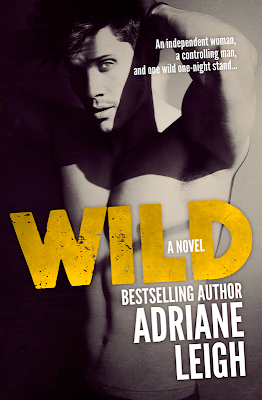 Kat Kennedy moved to the rugged coast of Maine to start a new life, but encountered much more than she bargained for in dark, dangerous, and seductive Lane Wild…
Desire and temptation smolder before she succumbs to her darkest fantasies with the captivating stranger. She doesn't expect to see him again after an explosive one-night stand leaves her breathless and craving more, but just like lightning in the darkness, he shows up in her life at the most unpredictable moments.
A sensual game of cat and mouse ensues before the attraction between them reaches a fever pitch—the magnetism combustible, the sexual tension nearly unbearable—and Kat finally abandons inhibition and explores the cunning, selfish, and sexual side of a world she's never known.


They have the perfect non-relationship—passion-fueled nights with no strings attached—until lifegets real and the past and present collide in a dangerous storm of lust and obsession.

A week-long party to celebrate the release of WILD with giveaways, teasers, book discussion, and more!
Friday at 9:00am until December 22 at 11:45pm

His thumb dragged across the seam of my lip. My eyes fluttered closed as he swiped across the flesh. My body lit up with lust and a dull throb settled between my thighs.
My heart stuttered a beat before I whipped my eyes open and pulled away. “Hands to yourself, Casanova.” I backed away and beelined for the front desk. The guilt was already nagging at me for involving him in my life anymore than I should have. “Can I help you with something or did you just come in to torment me?” I slipped behind the counter, thankful for the space that now separated us.
“Saw your car out front. Had to see those sweet lips again.” His eyes bounced down to the lips he’d just touched.
“Really? That’s your line?” I cocked an eyebrow at him, trying to steel myself against his rugged good looks. His dark hair lay carelessly across his forehead, his thick sculpted eyebrows arched, and his lips pulled into a devilish grin that emphasized his high cheekbones and stunning light blues eyes, which flashed with dangerous amusement.
He broke out into another laugh, his arms crossing his chest. “You're sexy when you’re sassy, Sugar.”
“I am not. And cut it with the ‘sugar.’ I’m no one’s sugar, especially not yours.”
“Hmm, is that so?” His eyes scanned my body, landing for a moment on my chest.
“Eyes up, Casanova.”
His eyes flashed to mine, a small smile curling the corners of his mouth. “Can I take you out?” His large body felt imposing in the small space. His energy was engulfing everything around him, sucking the air out of the room and causing oxygen to rush from my lungs.
“Not a chance.”
“Okay, let’s say we skip the date. I just want you back in my bed.”
My mouth dropped open. “Another original line.” I cocked my head to one side.
“Is it working?” He stepped closer and leaned across the counter, invading my space and sweeping the breath from my lungs.
“Nope.”
“Shame. Those lips wrapped around my co—”
“Don’t even go there. I don’t even—that night was a mistake. I hardly remember it and it’s not happening again.” My irritation flared. I'd never met someone so blatantly vulgar.

Adriane Leigh was born and raised in a snowbank in Michigan's Upper Peninsula and now lives amongst the sand dunes of the Lake Michigan lakeshore. She graduated with a Literature degree but never particularly enjoyed reading Shakespeare or Chaucer.
Adriane is married to a tall, dark and handsome guy, plays mama to two sweet baby girls, and is a voracious reader and knitter.