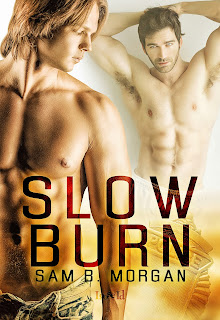 
Detective Douglas Brody has only ever known the life of a cop. Raised strict but fair by his police chief father, he joined the academy right out of school, climbed the ranks hard and fast, and now works homicide for the City of Charleston. The job is his entire life. For years it’s kept him happy enough to minimize the side of him that craves what he believes is wrong. When an accident on the job puts him temporarily off duty, everything in Brody’s world changes. He has to prove himself once more to be best cop in the department, all while dealing with Zack – his persistent, sexy, and out of the closet physical therapist.

Zack is big grins, floppy hair and tackles his job with the same full-blown enthusiasm he does everything else. When the “patient from hell” is thrown his way by another PT who can’t handle him, Zack is committed to achieving the impossible. His new patient is a head strong and hot as hell homicide detective, who oozes as much resentment as he does sex appeal. Any involvement with a patient, never mind a man who is so deep in the closet he can’t see light, is something Zack swore he’d never do again.

But Brody slowly proves too much to resist…

He could work out a resting heart rate from this, listening to the strong thumps, quickly glancing down at his watch. Decent. Resting below sixty. Brody was fit. A lot more fit than he gave himself credit for. The muscles in his chest were defined, and that didn’t come from police work. He had to work out regularly.

The meat of Zack’s hand rested on his broad chest, fingers moving on the swell of his pectorals as they rose and fell with each breath. The stir in his shorts brought him back front and center to the fact that this wasn’t the best idea. Leaning over his very attractive and touch-phobic patient. Even if all he intended to do was see if the man could lighten up. Maybe even laugh.

He wasn’t laughing now. When Zack lifted his eyes to Brody’s, he was hit with the full intensity of stormy gray. Not filled with amusement anymore but with something else.

It sent heat down Zack’s spine and into his shoes. He wasn’t even listening to the beats, just frozen in place with the buds in his ears, fingers still pressed to Brody’s chest as they stared at each other. The humor of the moment fell away as Brody continued to stare, arms still folded behind his head, mouth set into a straight line.

Zack straightened a tad too sharply and tucked the scope around his neck. Pulling his face into a rehearsed, easy smile, he hid the heat thrumming in his veins. “Yeah. You’ll live.” He started backing toward the door and gave a lame salute that made him want to cringe. God he was such a spaz. “I…I’ll see you next week.”

He rushed to exit stage left, narrowly missing the doorframe on the way out.

Zack could be downright pushy when he went into healthcare-professional mode. Brody wasn’t used to being told what to do. The small voice inside him that rejoiced in response was the one he hated most. He clenched his eyes shut and relaxed his leg.

“Good,” Zack said, his voice low as he focused.

He scooted himself up, knelt down, and hooked Brody’s knee over his arm, placing one hand at the back of his thigh, the other on the front. Brody tensed everywhere. He didn’t mean to, he probably shouldn’t, but he couldn’t help it.

“Relax. Hey,” Zack said and didn’t say another word until Brody opened his eyes and met Zack’s gaze. “Relax. The cramp comes right back if you’re tense. Trust me.”

Brody nodded again because it was all he could manage. It wasn’t that he didn’t trust Zack. Oddly enough, he did. But he didn’t trust himself. He didn’t like being in someone else’s hands—yet he did. He wasn’t comfortable with the vulnerability, but he was. And the position he was in was more than a tad suggestive. Except, of course, to someone like Zack. Zack, who only saw physiology, muscles, and ice packs. Cramps instead of sexual tension. Charlie horses instead of thighs.

Brody focused on the trees to his left and tried not to think about the man between his legs or the hands all over him. It made him wonder about the next time he could get out of town.

“Is this helping?” Zack asked.

“Huh? Oh…yeah. Thanks,” Brody answered without looking at him.

Brody knew it was his way of making Brody either talk or look at him or pay attention. Drove him fucking nuts, but it worked. Brody turned his head to glare at Zack like a pissed-off delinquent, but when his eyes found Zack, Zack wasn’t looking back.

Zack’s gaze was somewhere below Brody’s waist, dragging along one thigh, then the other. His attention lingered there, and Brody felt it all the way through his skin. It wasn’t professional Zack checking out his alignment either. Far from.

Something different, something hungry flashed in the deep brown of Zack’s eyes. Brody felt a lick of pure heat drag up his spine and back down. Straight to his groin. He didn’t know what he did to make Zack meet his eyes. He didn’t flinch or gasp or do anything besides remain frozen in place. Still, Zack looked at him, his eyes weaving a tale that had nothing to do with physical therapy.

Grasping fingers, slick skin, entwined bodies, and the kind of intensity that hurt so good you’d want it again and again. It sparked between them and hung in the air, thicker than the midsummer humidity. Brody recognized the same lust that continued to torture him right there in Zack’s eyes.

Sam B. Morgan writes contemporary gay romance with complex, complicated men. A love of travel means settings from small town South Carolina to Sydney, Australia serve not only as backdrops, but supporting characters in each and every book. Sam enjoys fast cars, slow Sunday mornings, hot coffee, and even hotter heroes.