Someone To Keep Me Blog Tour and Kindle Giveaway!! 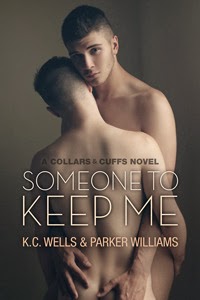 
Eighteen-year-old Scott Keating knows a whole world exists beyond his parents’ strict control, but until he gains access to the World Wide Web, he really has no idea what’s out there. In a chat room, Scott meets “JeffUK.” Jeff loves and understands him, and when he offers to bring Scott to the UK, Scott seizes his chance to escape his humdrum life and see the world. But when his plane touches down and Jeff isn’t there, panic sets in.

Collars & Cuffs favorite barman and Dom-in-training, Ben Winters, drops his sister off at the airport and finds a lost, anxious Scott. Hearing Scott’s story sets off alarm bells, along with his protective instincts. Taking pity on the naïve boy, Ben offers him a place to crash and invites him to Collars & Cuffs, hoping his bosses will know how to help. Scott dreams of belonging to someone, heart and soul. Ben longs for a sub of his own. And neither man sees what’s right under his nose.

I was trying to make shopping a fun experience, but Scott wasn’t making it easy. I figured he’d had a heavy morning emotionally, and I thought taking him around Debenhams department store would provide him with a little light relief. I kept holding up these really loud shirts and telling him he’d look good in them. His reaction confused the hell out of me. It was almost as if the boy didn’t know how to have fun. And when I held up some really skimpy underwear, I thought he was going to faint from embarrassment. I kept looking at the clothes he’d picked out. Two pairs of jeans, no problem there, but the shirts were bland, boring even. Scott was eighteen, for God’s sake. In desperation, I picked up a blue shirt I thought would really suit him. The color was a perfect match for his eyes. I held it out to him.
“Would you wear this for me?”
He gazed at me for a moment, and I thought he was going to refuse. Then he nodded shyly. Thank God. I put it in the basket along with his other choices, and we headed for the till. I handed over Leo’s letter of authorization confirming his phone call, and we were done. As we left the store, loaded up with bags, Scott asked for the receipts, to keep them safe to give to Leo.
I snickered. “You do know Leo won’t do anything with those receipts, don’t you?” I knew my boss better than he did.
Scott stopped dead in the middle of the pavement, his mouth open. “What?” I shrugged. He held out his bags. “I’m sorry, I can’t accept these.” God, he could be stubborn.
I rolled my eyes. “Fine, be like that. I’m sure the people at the launderette won’t mind seeing you standing there in your underwear washing your one suit.” I started walking again, laughing inwardly as he caught up to me in a hurry.
Scott tilted his head. “Launderette?”
I searched for the American equivalent. “Laundromat.” A horrified expression crept over his face. Yeah, I’d thought that would make him stop and think. “Can you afford to be proud right now?” His face fell, and I instantly regretted my words. The boy had to see things clearly, though.
Scott looked at his bags of clothing, his expression grudging, to say the least. “Okay, but I still want the receipts.” Out came that chin again. The lad had some backbone to him.
This time I stopped. “You’re going to be stubborn about this, aren’t you?”
The color rose in his cheeks. “It’s not being stubborn, it’s being responsible.” His lips narrowed. “I don’t need someone to take care of me.”
“Fine. Whatever,” I muttered and started walking again. I glanced at the boy surreptitiously as we went along. Regardless of what came out of his mouth, everything about Scott said something entirely different. Alex was right: the lad needed a keeper. I turned off Piccadilly onto London Road, back to the hotel where I’d left the car.
“Where are we going?” Scott looked at me in confusion as he caught sight of the hotel.
“We’re going to my place. I have a flat.”
An eager expression crossed his face. “Do you need help with that?”
I frowned. “Help with what?”
“Your flat. Have you got a jack?”
I struggled for a moment to understand. Then it dawned on me. I laughed. “Okay, for future reference? A flat is an apartment.” I shook my head, still chuckling. “How do you expect to write if you don’t even know English?” His cheeks flamed.

Born and raised in the north-west of England, K.C.Wells always loved writing. Words were important. Full stop. However, when childhood gave way to adulthood, the writing ceased, as life got in the way.

K.C. now writes full-time and is loving every minute of her new career.
The laptop still has no idea of what hit it... it only knows that it wants a rest, please. And it now has to get used to the idea that where K.C goes, it goes.
K.C. can be reached via email (k.c.wells@btinternet.com), on Facebook (http://www.facebook.com/KCWellsWorld) or through comments at the K.C.Wells website (www.kcwellsworld.com ) K.C. loves to hear from readers.

PARKER WILLIAMS began to write as a teen, but never showed his work to anyone. As he grew older, he drifted away from writing, but his love of the written word moved him to reading. A chance encounter with an author changed the course of his life as she encouraged him to never give up on a dream. With the help of some amazing friends, he rediscovered the joy of writing, thanks to a community of writers who have become his family.

Parker firmly believes in love, but is also of the opinion that anything worth having requires work and sacrifice (plus a little hurt and angst, too). The course of love is never a smooth one, and Happily Ever After always has a price tag.

Looking forward to this!

Can't wait to read this series, it sounds great!