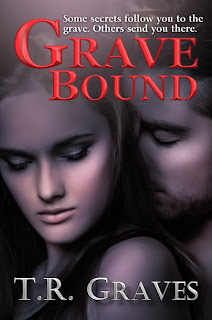 Some secrets follow you to the grave. Others send you there.

Emily Riddle has lived her entire life inside a patriarchal commune led by her father. There are many rules, but the most important one, 'keep it in the commune', is the most difficult for her to follow... especially since the only people willing to champion her cause live on the outside.

When Emily learns her father has promised her to Lorenzo, a perverted man who has plans for her that extend well beyond marriage and kids, she rebels. Regardless of the consequences, she refuses to marry someone who'd rather beat her than caress her.

A day of hooky that starts out as a tiny act of defiance - sneaking out of the commune for a swim - turns into a day filled with hope. After spending time with Levi, a man camping near the lake, she finds what true romance looks like and catches a glimpse into a future that's filled with love and admiration rather than hate and submission.

That tiny peek is enough to change the course of Emily's existence and makes it nearly impossible for her to go back to the commune and pretend she'll ever be able to tolerate the life chosen for her instead of the life she longs for. One that includes Levi.

Fighting to escape the commune, its leaders, and her fiancé proves to be more dangerous than Emily expected. The secrets she knows, as the leader's daughter, will either follow her to the grave or send her - and Levi - there.


With a mischievous grin, Levi twists until I'm the one lying back against the log. The way he studies my every feature… like he has to have me… makes my heart skip.

Almost but not quite touching, his lips hover right above mine. "I thought he'd never leave. Would you mind terribly if I kiss you again? I've been waiting patiently long enough," he says softly.

The heat coursing through me has grown scalding, a feat I wouldn’t have thought to be possible until now. I nod eagerly and meet his lips on their way down to mine. Levi kisses me long and hard, and it still isn’t enough for the two of us.

He props himself up on an elbow and uses his other hand to trace my neck, shoulder, and arm before sneaking his hand beneath my shirt's hem and sliding it toward my belly button. He runs his hands over my stomach, my side, and back. There is a fire blazing along his path, and every part of me that hasn’t been caressed by him begs to be. Everything about this kiss makes our afternoon kiss and its excitement pale in comparison.

"Your skin in so soft. I'd give anything to see you in your bikini again," he mumbles around our kiss.
"Maybe one day you will," I murmur, knowing full well I would strip down to my swimsuit right now for him if Tope weren't around.

Levi kisses me again, and this time it's with an intensity that feels like he can't get enough of me. He doesn't pull back even the tiniest bit until Tope returns and loudly clears his throat.

The author of The Warrior and the Secret series—currently available—and the Moral Dilemma and the Underwater series—to be released in 2013/2014.
She lives in Texas with her husband, their nineteen-year-old daughter, and nine-year-old son. Besides being blessed with a supportive family, she counts her career as an administrator and registered nurse in not-for-profit hospitals among her most fulfilling accomplishments.

Thank you so much for your support. I really appreciate it and hope you and your followers love Grave Bound, a powerful book with an ending no one will see coming. ;)

Congratulations, Tami! The book has been sent.