Slow No Wake Promo and Giveaway!! 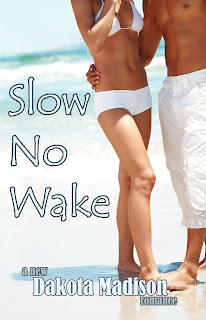 After finding her sister in bed with her fiancé, 25-year old Lexie Wilkins decides to relocate to southwest Florida to start a new life and escape relationships all together. What she doesn’t expect to find are two attractive kite surfers, who both want her.

So much for Lexie’s vow for her fresh start in Florida: a no wake zone. Having two guys in her life is sure to make waves.

Eddie is the captivating bad boy, who lives next door. Daniel is Lexie’s sweet and ruggedly handsome co-worker. The differences between the two men are just as extreme as their sport…

Who will she choose?

Excerpt
I was finally starting to clear the turmoil in my mind and return to my no wake zone when I could sense someone sitting next to me. I briefly panicked as I wondered what I should do. Then I slowly opened my eyes to see Eddie sitting in the chair next to me staring at me.
“Hello, Alexandria,” he said in greeting.
“Wh-what are you going here?” I stammered.
He grinned. “Sitting with you.” There was that damn dimple again. The sight of it made my heart race.
“I don’t remember inviting you to sit at my table.”
“Hmm,” he said as he reached for my tea. “What are you drinking?”
Then to my shock and horror, he helped himself to a sip from my cup.
“You got the mint herbal tea. Good choice.” He took another sip of my tea then placed the cup down between us. Did he really think I was going to share it with him?
“I also don’t remember giving you permission to drink my tea,” I glared at him.
Eddie leaned in close and said, “Alexandria, you should know by now that I take what I want.”
I gulped. He was so close I could feel heat radiating from his body. A shiver ran through me.
“And you want my tea?” I asked as I instinctively pulled the cup closer to me.
He leaned in close enough to whisper in my ear. “That’s not all I want.”
My throat went completely dry so I took a sip of tea before remembering Eddie had just taken two sips from the cup. The thought of his lips recently touching the same thing my lips were touching turned me on more than I liked. I couldn’t stop thinking about his lips and what they could do to me.
When I glanced at Eddie, he was staring at me. And not just any stare. He was giving me a very naughty ‘I want to rip your clothes off’ stare. Oh, God, I’m in trouble, I thought as my stomach started to churn. The only thing I could be thankful for was that we were outside in a very public place.
“When are you going to let me show you everything I want from you, Alexandria?” His gaze was laser intense.
I tried to speak but no words came out. I had to think rationally before I did something completely stupid. But the only thing that came to mind were his lips touching mine. I instinctively bit my lower lip, which then reminded me of Daniel and the utterly sexy way he always did that.
Oh, God. I was definitely going to drive myself insane.
It took every ounce of energy I could muster to stand and grab my book. “I think I’d better go,” I managed to mutter.
Eddie motioned toward my half empty cup. “Aren’t you going to finish your tea? I think it’s still hot.” The way he said it, made it sound like the tea wasn’t the only thing that was still hot. Ugh.
“Why don’t you keep it,” I said as I turned to leave.
I tried to hurry away but I could feel Eddie coming up behind me. His energy was unmistakable.
“Still going on that date tonight?” he asked when he caught up to me.
“Not that it’s any of your business,” I said, trying to put him off.
He slid in front of me and stopped me from walking any further. I froze when I saw that his expression had turned serious. He cupped my chin with his hand and gazed into my eyes. “Spend the night with me instead of him.”
I gulped. Why was Eddie doing this now? I was going to see Daniel in just a few hours.
“I can’t do that, Eddie.” I would never do that to Daniel.
“Yes you can,” he urged. Eddie had so much desire in his eyes it took my breath away.
“I can’t break a date I have in a few hours. It isn’t fair.”
Eddie ran a finger down the side of my cheek and it sent shivers through me. I knew if I didn’t get away from him immediately, I’d end up in bed with him and I would be breaking my date with Daniel. Deep down, I knew I didn’t want to do either. Or did I?
“You’re too good, Alexandria,” Eddie said. “Do you know that?”
I didn’t have the time or desire to analyze that one. I just knew I had to get away from Eddie’s charms before he charmed me right into bed.
“I really need to go.” I tried to sidestep Eddie but he just moved in front of me again and continued to block my way.
He leaned close to my ear and I could feel his breath on my neck. And God, he smelled good. Like coconut suntan oil. “If you don’t get everything you need tonight, you know where to find me. Just knock on my door. I’ll be waiting.”
Then he gave me a little grin, turned and walked away, leaving me melting on the sidewalk into a heap of lust and desire.


About the Author
Dakota Madison has been writing since she learned to read and fell in love with books. When she's not at her computer creating spicy new romances, Dakota is traveling to exotic locales or spending time with her husband and their bloodhounds.
Author social media links:
http://12novels12months.tumblr.com/