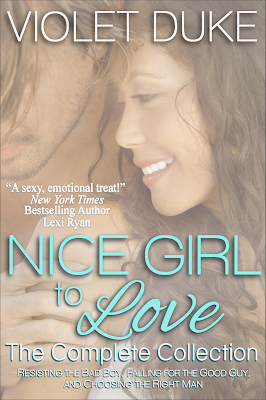 The • Nice • Girl n. 1. female of the species who never does anything or anyone bad: Hands-off, she’s a nice girl. 2. the woman that men take home to meet mom: Find my son a ‘nice girl to love.’ SEE ALSO: a good girl; girl scout; Abby Bartlett

This is the complete Nice Girl to Love serial romance collection, which contains: Resisting the Bad Boy (Book One), Falling for the Good Guy (Book Two), and Choosing the Right Man (Book Three).


THE ONE SHE NEVER THOUGHT SHE COULD KEEP…

Abby Bartlett is the quintessential nice girl. Between teaching, volunteering, completing her PhD, and helping her best friend raise his daughter, Abby never gets the chance to be anything but nice. That is, until the all-wrong-for-her man she’s only ever known from afar starts daring her to simply take that chance for herself. His sage advice? Try something wild and fast. Preferably him.

An unbridled, hotshot attorney with a not-so-little black book, Connor Sullivan has earned himself quite the bad boy reputation. But in his defense, he’s a very conscientious one. He knows far too well that sometimes in life, love isn’t enough…or worse, not even a factor at all. To avoid that misery–and repel the drama–Connor has a firm ‘nothing over a month’ rule. Who knew a nice girl would be the one to make him want to break all his rules?


THE ONE SHE NEVER HOPED SHE COULD HAVE…

Abby is well aware that everyone thinks she’s in love with her best friend Brian. He is, after all, the type of man a nice girl should be with—the polar opposite of the bad boy—the kind of guy who didn’t let his wife’s decade-long illness stop him from showering her with a lifetime of love every second until her dying day. But everyone’s wrong; she couldn’t possibly be in love with him. Because she’s never once allowed herself that option.

It’s taken a while but Brian has finally come to terms with surviving the woman he spent half his life loving, a third of it losing. Truth is though, he wouldn’t have ‘survived’ any of it really had it not been for Abby—sweet, incredible Abby—the woman he’s never once had to picture his life without, never realized he couldn’t truly live without. Until now. Now that he’s finally able to love her the way she deserves, the way he knows she wants to be loved…by his brother. Who’s giving him exactly one chance to speak now or forever hold his peace.


A DECISION SHE NEVER DREAMED SHE’D HAVE TO MAKE…

And now it’s up to Abby to decide between the bad boy wanting to start a life with her and the good guy fighting for the life they’ve already built.

Connor leaned back, stuffed, and frankly surprised at how good of a time he was having simply talking with Abby.  “Doesn’t sound like you have that much time for yourself.  What do you do for fun?”
She got up to grab them another two beers from the kitchen.  “Honestly, I’m a homebody.  Never got into the nightlife scene here.  Plus, by the time I was twenty-one, I was basically babysitting Skylar all day every weekend, and nearly all my weeknights.  Since that pretty much carried on clear until last year, I guess my idea of fun is hanging out with her.  Lame, I know.”
He felt like he was talking to a martian.  He hadn’t realized she’d spent even more time babysitting Skylar than he had.  And he knew for a fact—from Brian’s complaints about it—that she hadn’t taken a single cent from them for babysitting.
For God’s sakes, she was just so nice.
“So you don’t do anything just for yourself?  Just for fun?”
“Well, I have been privately executing my mission to learn how to cook the most beloved dishes from every country in the world,” she returned with a smile.  “That’s fun.”
It was possible baby bluebirds helped her get dressed in the morning.
She was just that sweet.
“You’re driving me crazy.”  He swept an arm around her waist and lifted her right up onto his lap.
“Connor!”
He slid a hand into her hair, rubbed a thumb over her heated cheekbone as he brought his lips to within inches of hers.  “I shouldn’t want you this much.  You’re everything I’m not, and I’m everything you couldn’t possibly want.  I know I should leave you alone, but I just can’t.  I can’t stop myself from wanting you.”
Her breathing had grown so erratic, he was actually starting to get concerned.  “Say something, sweetheart.  I’m baring my soul here.”
“I shouldn’t want you either,” she whispered, “but I do.”
His arms locked around her, instinctively staking a claim on her.  Mine.
For now.
The two words were his only anchor keeping him in the reality he maintained for himself.  He had to be brutally honest with her, with them both.  “I meant what I said earlier, Abby.  I’m never going to break my one-month rule.”  Feeling like the lowest piece of scum, he hammered that last nail in, “Not for anyone.  Not even you.”
She was silent for a long while, and Connor started preparing himself for the rejection to come.
“I know our fifteen minutes of friendship are up but can I ask you something as a friend?  Will you answer me as one?”
He tensed.  “I’ll try.”
She chuckled.  “Again with the copout.”  Raising her warm doe eyes up to his, she asked quietly, “If you weren’t trying to get in my pants, if you were just my friend and I asked you what one thing I could do to stop being ‘a nice girl’ for just a little while, what advice would you give me?”
That was easy.  “I’d tell you to try something new.  Something that excites you.  Something that’ll take you from zero to sixty just as fast as it could take you back to zero whenever you were ready to return.”
“Something wild and fast...”  She loosened her death grip on his shoulders, slid her hands down his back slowly.  “That’s good advice.”
He saw her gaze travel down to his lips and it took everything he had not to kiss her right then and there.
“Are you volunteering, Connor?  To be that something wild and fast for me to try?”
“No,” he replied raggedly, “I’m insisting.  Requiring.”  He dropped his forehead against hers.  “Asking.”
Her eyelids dipped down, veiling her reaction from him.
And so he waited.
“I can’t do a whole month with you.”
He blinked in surprise.  That, he hadn’t been expecting.  “Why not?!”
“It’s too long.”
Well, he did ask.
A touch indignant, he argued, “You said you don’t do one night stands.  Now you’re saying a month is too long?”  He knew he was getting overly worked up but he couldn’t help it, she was being irrational.  His brain started firing on all pistons, every combat cell in his body taking a front seat like they always did when he was about to do battle in the courtroom.  “Or is it just one month with me that’s too long?”
She flinched.
He felt thoroughly insulted.
“It’s not how you’re making it.  Being with you would be like…ice cream.  The most decadent ice cream I could ever imagine.  I’d be hooked after the first bite.  And if I didn’t discipline myself, I’d...overindulge.”
“Until it made you sick?”  He wasn’t really good with metaphors.
A smiled peeked through.  “No, until it was all I’d want to eat, all day, every day.”
What the hell was wrong with that?  “And if you overindulge on the ice cream…”
“I’d be in a sugar coma, incapable of doing or thinking of anything else.  But you.”


Call him a bastard but hearing that felt good. 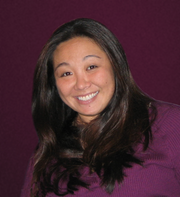 A former professor of English Education at the University of Hawai'i, Violet does in fact miss teaching terribly but is ecstatic to now be on the other side of the page writing wickedly fun contemporary romance novels. When she's not catering to the whims of her story characters or feeding her book-a-day reading addiction, she enjoys tackling reno projects with her power tools while trying pretty much anything without reading the directions first and cooking 'special edition' dishes that laugh in the face of recipes. Violet lives in Hawai'i with her two cute kids and similarly adorable husband.

I'm a good guy girl. Even if the bad boys have some hot qualities, bad behavior is a big turn off for me. When the good guy does something sweet, my heart just melts. :D Sounds like a great read! Thanks for the giveaways. :D

I think both have their appeal :) bad guys are fun to read about, but in the end, who doesn't want to marry the good guy?!

I like them both, but I drool more over the bad boy. He is usually super hot and snarky and that is my favorite combination!

It depends on the story but usually the good guy

The bad guy with a good guy heart.

I like the bad boy.. but seriously it doesn't last.. I've been looking for the good ones now.. but they are with the bad girls.. lol

In books I prefer the bad boys but in real life I want a good one :D

I prefer the good guy, a little more boring but reliable, calm, happy.

I prefer the good guy with an adventurous side!

A bad boy with good intentions always works for me

So so sorry for the late visit over to your fabulous blog! I was laid out sick in bed for most of the week along with my kids, who got sick both before and after me. :(

Thank you SO MUCH for hosting the Nice Girl books! It was an awesome blog tour and even from my sickbed, I had a great time checking out your blog on my phone! :) Huge thanks also to your fantastic fans for participating in the giveaway! ^_^