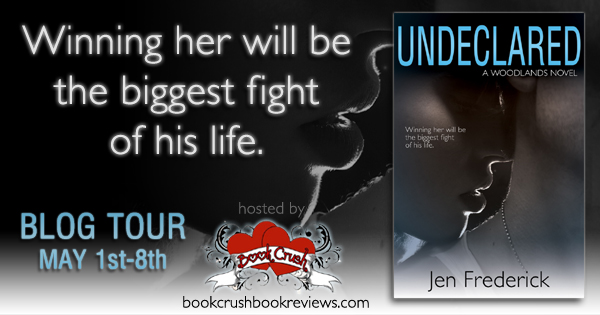 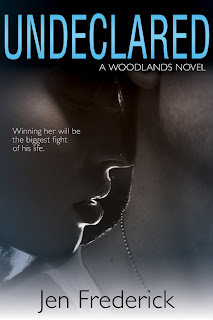 Release Date:  May 1st, 2013
For four years, Grace Sullivan wrote to a Marine she never met, and fell in love. But when his deployment ended, so did the letters. Ever since that day, Grace has been coasting, academically and emotionally. The one thing she’s decided? No way is Noah Jackson — or any man — ever going to break her heart again.

Noah has always known exactly what he wants out of life. Success. Stability. Control. That’s why he joined the Marines and that’s why he’s fighting his way — literally — through college. Now that he’s got the rest of his life on track, he has one last conquest: Grace Sullivan. But since he was the one who stopped writing, he knows that winning her back will be his biggest battle yet.

This is a mature New Adult book. I see that it is classified as YA - not sure how to change that - but I wanted to be clear that it has explicit love scenes in the story.

Undeclared is a very enjoyable New Adult romance, full of the angst-y roller coaster of a relationship between Grace and Noah that we all secretly (or openly) love. It’s my favorite kind of romance in that it is a duel point of view between Noah and Grace and I love how well the author makes a clear distinction in the tone of the writing within each perspective. Noah and Grace first become acquainted when Grace has a school assignment to write to a deployed soldier and Noah is her soldier. After 4 years of correspondence and deep running feelings for Noah on Grace’s end, he breaks her heart by telling her he only thinks of her as a friend, then leaves her silence for over a year. Now our story begins, Grace is attending Central College trying to step out of the shadow of her sports-star brother and gorgeous, talented best friend/cousin and come into her own as a possible photography art student. She is still struggling with the internal battle of trying not to turn every dark haired stranger into her Noah and move on to meet other men. Noah is also attending Central College, but with the sole purpose of trying to win Grace back into his favor. He knows he made a huge mistake by dismissing Grace a year before and has realized that she is one of less than a handful of people who loves him. After weeks of stalking her, he finally builds up the courage to face her and begins the uphill journey of convincing her to be with him.
It all started with a letter

K: One of my favorite parts of this story is that we not only get the duel perspectives from the two main characters, but we also get glimpses of the past through Noah’s old letters to Grace, shedding more light into the constantly thickening plot of the present. I also really liked how well the author created two different reading experiences from Grace to Noah. With Grace we felt her uncertainty and naiveness, her passion for her photography but her insecurity to fully rely on it as her major in college. And Noah is very rough around the edges, a man’s man, the typical military minded young man.
While usually I prefer the intimate scenes from the females’ perspective, I liked Noah’s descriptions better than Grace’s, he knows what he wants and doesn’t buffer his mind from the wantings he has had for Grace brewing for 4 years. Although I feel like there were some loose ends that were not tied up by the conclusion of the story (and I am hoping we get more from Grace and Noah in the upcoming novels in the series) I did like that the author was able to wrap it up without the ring on her finger and pregnancy announcement in the epilogue that we typically read in most of these types of romances.

A: I agree with Kendra, I loved the conclusion of the book! I loved the duel POV's too, but I also love the letters that Noah wrote to Grace, and how they tied into the chapters. I think the kicker for me was one of the last letters Grace wrote Noah,

"You are even better than Odysseus because he was an imaginary character dreamt up by some writer. You are real. And Amazing."

I think that about summed up Noah, AMAZING. He was sweet and considerate, sexy and had a bit of a bossy-alpha (sexy stud-muffin) side. I love the camaraderie between his house mates too! My only gripe about this book is that I can't relate to Grace. She's a bit flaky for a heroine, I get why she is, but still. Other than that, this was an overall enjoyable book!


"So are you thinking junior college transfers or freshman targets tonight?" I asked her as I finished applying my makeup, pretending like I was interested in finding a hookup.


I didn't want to answer questions about Noah. I didn't want to think about him at all. If I pretended to be interested in other things, then perhaps I could make that happen. It was worth a try, anyway.
"Depends on what you're looking for? One night hookup? Freshman. Some date potential? JuCo transfer," Lana said, sorting through tubes of lip-gloss. "And can I recommend we do away with lumberjack couture for the night? Your wardrobe suggests that you're gearing up to haul logs out of the forest. If you're aiming for Paul Bunyan, then your collection of plaid shirts is a great start-- otherwise choose something that isn't flannel," Lana said.
I looked down at my plaid shirt. "I thought the thrift-shop, country-girl look was in."
"Maybe at State, where Josh goes. In fact, isn't that Josh's shirt?"
I looked away guiltily. It was Josh's shirt. I'd stolen a few things from him this summer. He either didn't notice or didn't care, because he never said a word. But Lana had already seen my look and started to wrestle the shirt off my shoulders. Lana is thin but strong. It must be all the yoga she does. I stood there in my thin ribbed tank top, and Lana looked at my reflection in the mirror, quirking one eyebrow at me.
"Let's just say the guy-who-shall-not-be-named is there. Do you want to look hot? Or like you just got back from a gold dig in Alaska?"
"Hot," I mumbled.
"Super." She proceeded to drag me into her room and throw a silky blue shirt at me. "Put this on with your denim skirt and take off your sneakers."


Jen Frederick lives with her husband, child, and one rambunctious dog.  She's been reading stories all her life but never imagined writing one of her own. Jen loves to hear from readers so drop her a line at jensfrederick@gmail.com.
Connect with Jen Frederick:
https://www.goodreads.com/author/show/6995972.Jen_Frederick
http://jenfrederick.com/
https://www.facebook.com/AuthorJenFrederick?fref=ts
https://twitter.com/jensfred

Have a wonderful weekend!

Thank you for hosting me and I loved the thoughtful reviews. Grace...she is kind of flaky! LOL. Totally legit comment. :) She's perfect for Noah, though.