Welcome to my stop on the Wanted blog tour hosted by YA Bound.  Click HERE to see the full blog tour schedule! 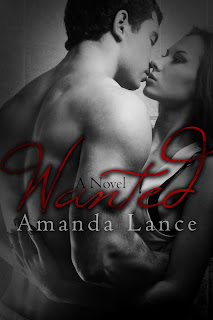 Wanted
by Amanda Lance
Release Date: May 2013
From Limitless Publishing

Summary from Goodreads:
Considering she’s a girl who calculates everything, Addie Battes knew the statistical probability of being abducted in her lifetime—too bad she never analyzed the odds of falling in love with her captor.

While stopping at a crowded rest area one summer night, seventeen-year-old Addie accidentally catches a truck hijacking in progress. Desperate to rid the crime of its only witness, one of the thieves kidnaps Addie. Yet surprisingly, when a renegade thief attempts to silence her for good, Addie is saved by the very man who abducted her. Now, forced on board a cargo ship in the middle of the ocean, Addie finds herself surrounded by international smugglers who want nothing more than to throw her overboard.

All except the artistic and intriguing Charlie Hays, whose strange protectiveness convinces Addie to trust him, even when common sense tells her otherwise. Yet, despite her doubt, and his unrelenting temper, their relationship develops into something much more. But, Charlie’s scorned colleague has stowed away, and as he seeks revenge against his coworker, Addie and Charlie are forced to put their new love—and lives—at risk.

Wanted is the kind of book that is unexpected in its twist of crime and suspense and romance. Addie starts as a smart but naïve girl who is focused on nothing but getting a cup of coffee at an unfamiliar truck stop when on a road trip with her dad. But Addie stumbles upon a case of being at the wrong place at the wrong time and witnesses a crime in progress.

Charlie is immediately drawn to Addie as the girl in front of him in line for coffee he couldn't help but talk to, but almost instantaneously she turns into being a huge liability in his "business venture" as he catches her witness the truck hijacking he is involved in, and he has no other choice but to take her against her will. Very quickly Charlie goes from abductor to protector to love interest for Addie, as she is struggles with being the victim of a kidnapping yet being kidnapped by someone she is physically and emotionally attracted to. What I liked about Addie is her intelligence, she is constantly trying to evaluate her situation (and it changes multiple times, very quickly) and think logically about how she is going to get herself back home.

I think the author does a good job in the beginning of her abduction at creating the feel of panic and desolation that would be only natural before Addie knows what is even happening. But as she gets a grasp on the situation and starts to get to know and bond with Charlie, she still has the thoughts of how to escape or communicate with her family. I also liked Charlie's persona. Even though he and Addie meet in a negative situation, he has a criminal background, and is involved in illegal activity, he still shows Addie the softer side of himself, and proves a good person can still do bad things, but it doesn't make them a bad person. Even though this was a very captivating read (I read it in only 2 sittings), I think the story in general was pretty far fetched.

Even though I liked the authors concept to mesh the dark-crime-drama and the fluffy-romance, the romance aspect missed its mark for me. It seemed too forced, almost like an act on both Addie and Charlie's parts (I was half expecting Addie to admit she was just flirting with Charlie to butter him up for her to escape, and Charlie to admit he was only sweet to Addie to get her to cooperate with his plan). The ending only reinforced that thought for me, it was pretty sharp. I think a nice epilogue would have smoothed some of the loose ends together.

All in all, it was a good read, which is saying a lot for me since I typically am not a huge fan of crime/murder mystery- type dramas. It was well written and abduction/kidnapping concept aside, would be appropriate for any young adult reader.

A native of New Jersey and lifelong nerd, Amanda Lance recently completed her Master in Liberal Arts at Thomas Edison State College after her BA in English Literature and AFA in creative writing. As an avid reader of all genres, some of her favorite authors include Hemingway, Marquis de Sade, Stevenson, Bukowski and Radcliffe.

When she isn’t writing or reading, Amanda can found indulging in film noir or hiking with her other half and their extremely spoiled dog. She is obsessively working on her next book and trying to tame her caffeine addiction.
Website│Twitter│Goodreads│Facebook