Fixed on You Release Event and Giveaway!! 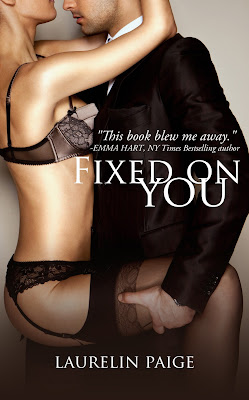 
Stalking and restraining orders are a thing of Alayna Pierce’s past. With her MBA newly in hand, she has her future figured out – move up at the nightclub she works at and marry the manager, David. He’s perfect for her because, although he’s attractive, he doesn’t get her all turned inside out and upside down like some other men have. It’s a safe plan, one that assures she’ll remain in control of her obsessive love disorder.


Streams of sunlight poured through the windows, warming and waking me up earlier than I would have on my usual sleep schedule. Before looking, I sensed I was alone. When I turned, I squinted at the clock on the nightstand next to where Hudson should have been sleeping. Nine-twenty-seven.
I blinked several times, adjusting my eyes, while I considered whether I wanted to get up and search for my lover or roll over and go back to sleep. I still hadn’t made a decision when the doors opened to the bedroom and Hudson appeared wearing nothing but black silk pajama bottoms and carrying a breakfast tray.
“Good, you’re awake,” he said as I sat up, the smell of coffee luring me further out of sleep. “I’m showing my family what an awesome boyfriend I am by bringing you breakfast in bed. Omelets. Sans mushrooms, of course. No cherry-flavored blow pops.” He winked as he set the tray on the table in the sitting area.
“This is one of those inappropriate moments for a blow pop anyway. And you should have said amazingly awesome boyfriend. Breakfast in bed is the best.” Though the thing making my mouth water was the never tiresome sight of Hudson barefoot and shirtless.
“I’m not that awesome.” He left the tray and untied the string of his PJs, letting them fall to the ground, exposing his beautifully erect penis. He slid under the covers and climbed over me. “I’m going to make you eat it cold.”
Before his kiss prevented me from speech or thought I mumbled, “Cold breakfast sounds perfect.”

Thanks for participating in my release event!