Stay with Me Blog Tour and $50 GC Giveaway!! 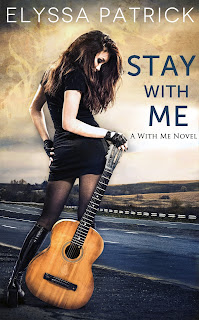 With one kiss, it changes everything between us . . .

I’ve been famous since I can remember. Singing, acting, dancing—I’ve done it all. The tabloids cover my every move, but I don’t want that anymore. I want to be normal, whatever that is.

When I leave Hollywood for college in Vermont, I’m on my own for the first time in my life. This is my chance to figure out who I am and what I want in life.

But it’s a lot harder than I expected. I can’t escape my image. Classes are difficult, and I’m struggling. And then there’s Caleb Fox.

Caleb is the one man who doesn’t want to use me. He breaks down my walls. He challenges me. He wants me. And I just don’t know if I can give him the same—or if he’ll stick around when he finds out my shameful secret that the tabloids haven’t managed to uncover.

Dating him is risky enough, but loving him could break me.

I drop the blackberry into his hand, and then reach for another one. I pop it into my mouth, and the sweet tartness of the berry floods my taste buds.

I raise an eyebrow. “Not eating yours?”

Great. Just great. I’m dribbling blackberry juice in front of a guy I find really attractive, sexy, irresistible, but totally shouldn’t. God, what is wrong with me?

“Still there,” he says, his voice gruffer than before.

I do another pass at my mouth, then wipe it.

“No, you’re missing it.” Then he steps closer to me, and I suddenly can’t find my breath. “Here. Let me.”

His thumb dabs at the corner of my mouth, his every touch sending sparks through my body. His dark, dark green eyes fly to mine. “I think I got it all.”

But his thumb stays near my lips, and I don’t move.

Every point in my body is tuned to this, awareness shooting through me like a lightning bolt striking water. I feel more alive in this moment than I’ve ever felt before.

I don’t do anything but stay exactly where I am.

Caleb takes another step toward me. His legs touch mine, his body brushing lightly against mine.

I notice the blackberry is still in his hand. “You still haven’t eaten yours.”

I take a small taste and feel the juice stain my lips.

His thumb swipes over my lips, smearing the juice onto them even more. He presses the rest of the blackberry against me but doesn’t say a word. I take the fruit in my mouth, my lips catching over the tip of his index finger as I do so. The taste of him is all I can savor—male, the salt from his skin, and the sweet bitterness of the fruit. His gaze locks onto mine, and I swallow heavily.

I try to be arch, but my voice comes out soft and wanting. “That’s becauseyou did it.”

My breath hitches in my chest as his other arm slides around my waist and pulls me away from the island right to him.

I heaved out an exaggerated sigh of boredom that’s soon ruined when I shiver with delight as his fingers gather in the material of the t-shirt. “I guess I’ll just have to close my eyes and suffer through it.”

“No suffering,” he promises.

His hand slides up my back, and my muscles, already tightened with awareness, start to ache from wanting. His fingers skate up my neck, and my nerves jangle.

I’m suddenly wondering if he’s ever going to kiss me.

I stretch my hand over his chest, knotting his shirt in my grasp, and yank him to me. “Caleb.”

He lowers his head to me, and my eyelids flutter closed. I lean toward him, waiting—just waiting—for when he touches me. I tighten my hold on him, trying to urge him to do it now, but no, he doesn’t heed my unspoken demands. He doesn’t hurry. He doesn’t rush. It’s like he has all the time in the world until he kisses me.

His finger gently swipes over my mouth, tracing it softly, like he’s memorizing the shape of me. Like he’s trying to get all the details of my mouth down before he claims me. He presses lightly against my lower lip, dipping into the soft plumpness there.

I smooth my hands out on his chest. I’m pressed against him so tight that I can’t do more than reach up and grasp his shoulders. I want to slide my fingers through his hair.

But more than that, I want to feel him against me.

Almost as if he’s heard my thoughts, Caleb’s lips lightly press against the corner of my mouth, where he removed the berry stain only a few moments ago. I still, and his hand leaves my neck to slide down to rest at the small of my back before moving back up in a slow movement that has pleasure coursing through my body. I gasp, and his mouth flutters another kiss at the corner. Brief, these flutter kisses—never quite landing fully on my lips or staying too long.

I make a sound of want. I press even closer, as if I’m inking myself on his skin, in his blood, urging this patient, sexy man to take my mouth—to take it now.

His mouth finally touches mine, but it’s not a kiss that claims or declares intent.

His lips give kisses upon mine, like rain watering parched land. His mouth moves against mine, gentle, strong, and it makes me cling to him, to give more to him, to open up in ways I never have with any man before.

His teeth catch on my lower lip, lightly tugging, as if asking a question, one that I answer by opening my mouth and letting him in. His tongue slides against me, tasting, seeking. He’s all I know, all I want to know, and I want him to know me in every possible way.

This might just be lust, but it doesn’t feel like it—not with this assured gentleness, this giving of a kiss, like he’s waited all his life for this—for me—and now that I’m here, he’s not going to do anything to mess it up.

He doesn’t make me feel weak in his kiss. I feel strong, treasured . . . desired.

His kiss turns hotter, as if he’s losing control of himself.

Oh yes, I think. Lose control, Caleb. Lose it with me.

We first meet singer, dancer, and actress Hailey Bloom as she's transitioning from her life of fame and fortune in Hollywood to life of normal, blend into the crowd college student in Vermont. While most people dream of the life Hailey had, she is just trying to escape the betrayal and devastation that comes with living in the spotlight. At her first college party she meets the dark and mysterious Caleb Fox. Although it is definitely mutual attraction on both their parts, Hailey is hesitant about getting close to Caleb because of her past damage. But Caleb continues to pursue her and Hailey realizes she's not in Hollywood anymore and she can trust Caleb.

But Hailey is still carrying around a deep secret, one she is afraid would cause Caleb to leave her if he ever knew the truth. And even though she has escaped across the country, it still doesn't stop tabloids and rumors following her, especially when her own mother is one who is fueling the gossip. Can Caleb break down all of Hailey's tightly fortified walls or will he give up when she continually refuses to let him all the way in. Will Hailey be able to accomplish her goal of being "normal" or will she always carry her Hollywood darling, starlet image?

I really liked the way Patrick wrote the developing relationship between Hailey and Caleb. Although the were initially attracted to each other they did something crazy: they date. She meets his friends and family, becomes friends with his sister, and over time the bond grows stronger and they fall in love with each other. She also does a fantastic job at writing sex scenes! This would be a perfect example of a new adult book, not over the top with the sexual content but hot hot hot. I really enjoyed the secondary characters. This is a more-than worthy addition to the comparable new adult romances out there now. It was breath of fresh air with no insta-love, no soap opera angst, no drama at every turn. It is a well developed love story with very likable characters and extra enjoyable with the bonus of very well written sexual relationship. I will definitely be following the series; I loved Caleb's sister, Daphne with all her attitude and spice, Nick's overprotectiveness of her could lead to a very combusting relationship. Plus Caleb's sexy and quiet librarian friend, Griff possibly getting together with the soft, dreamy artist Kate.

Elyssa Patrick writes sexy, emotional contemporary romances and New Adult. She is currently working on her next novel.

Hmm this sounds like a very emotional read, I will have to add it to my goodreads :) Thanks!

Thank you for the review, just added it to my TBR list. Thanks for the chance to win a copy :)

I really like the name you picked Caleb Fox, it just sounds good lol

I'm adding this to my TBR list! It sounds great! Thanks for the great giveaway chance!

I'm about to have a baby, and I'm sure I will be doing some late night reading during feedings.

Sounds great going to add to my TBR list!

Thank you for the opportunity

I hadn't head of this one and it sounds good. Thanks for sharing your review thoughts and thanks for the giveaway opportunity.

Looks good! Thanks for the giveaway!

Sounds wonderful, hope I win. Thanks for the giveway.

I love that for once, it's the girl who's a rock star. Thanks for the giveaway!

Thanks for the chance to win :)

Thank you for the giveaway!

sounds like a great book! thanks for the giveaway

Excellent review! Thank you for sharing and the giveaway!

Thanks for the great giveaway!