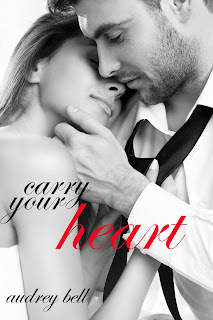 Champion skier Pippa Baker lost everything in the avalanche: her boyfriend, his best friend, and her will to win. After a year of grief, she returns to competition.

She finds more than buried memories and steep slopes in Utah. She finds Hunter Dawson, a heartbreaking daredevil with the gold medals to prove it. And she finds that his reputation doesn’t stop her from falling hard, and that her heart might not be as broken as she once believed.

Pippa knows how much love hurts when it’s gone. Will she stop herself before she’s in too deep? Or will she let herself fall?

This is a new adult, contemporary romance novel.

I really enjoyed Carry Your Heart by Audrey Bell. It is a very sweet and touching romance. One thing I really liked about this story is that it centers around the lives and careers of professional skiers and snowboarders, it sets it apart from the typical college romance novels. Bell does a wonderful job at creating very relatable and lovable characters in Pippa and Hunter. Both have had their own share of hardships and I give her a lot of credit for being able to develop more of a sense of sympathy and heart ache for them instead of just angst and drama. Plus there's something fantastic about following the love story that starts with a girl who calls the guy a douchebag when first laying eyes on him!

"Everyone suffers tragedy. I know that. Few escape into adulthood unscathed by some serious loss or hurt or trauma. Life is too chaotic. Still, after Danny and Ryan died in an avalanche that for some knowable reason didn't kill me too, I felt like a stranger in a foreign country, where I understood the language, but no one understood me."

We meet Pippa one year after a horrific skiing accident in which she lost her boy friend and best friend. She had only known her life as an Olympic skier in training, but devastated after the avalanche she disappears from that life to try and rebuild herself away from the mountain. Instead of healing she realizes that all she has been doing is hiding and with some strong pushing from her former ski coach, she returns to the slopes. But on her way she crosses paths with the "unexpectedly gorgeous- annoyingly good looking" (but complete douchebag) snowboarder, Hunter Dawson. Hunter has his own set of demons to contend with between a broken family, with a never-satisfied, retired Olympic athlete of a father who practically disowned him when he chose snowboarding over skiing and younger brother who looks to Hunter as not only a role model, but more of a father figure than their own dad. Although Pippa and Hunter have a bit of a whirlwind romance (complete with dead ex-boyfriends and his still living- and judging- friends and jealous ex-girlfriends spreading vicious rumors on the internet) we get to fall in love with them falling in love with each other. Top it off with off the Hunter's off the wall nicknames for Pippa and their banter that usually ends with her calling him an asshole (although she had some of her own "asshole" lines back to him) it makes for one enthralling romance.

"Whenever I think of him, something swells in my chest, Hunter's smile, the way he could touch me and make me just feel so many things, but above all of them, he made me feel alive."

My only real negative with the story would be the ending. I really appreciated the way Bell took her time to build up the characters and the plot, but the ending seemed to sneak up and just be over in a couple paragraphs, with lots of loose ends. But with any luck that means there will be a sequel coming and we will get more Pippa and Hunter!

About the Author:
Audrey Bell lives in New York City, where she indulges her SoulCycle addiction and expresses her passionate hatred of the 6 Train. You can find her reading in Central Park, overcaffeinating at Starbucks, or trying to kidnap her neighbors’ Maltese puppy. She loves hearing from readers

Fun Facts
1.       I lost my two front teeth when I walked into a swinging door.
2.       I’m afraid of the subway and I live in New York City. I’m the most useless New Yorker you’ve ever      heard of.
3.       I thought the saying “for all intents and purposes” was “for all intensive purposes” until yesterday when I misused it in an email while trying to sound smart.
4.       I wanted to be a journalist until I realized it was way more fun to make things up.