The Trouble With Goodbye Blog Tour and GC Giveaway!! 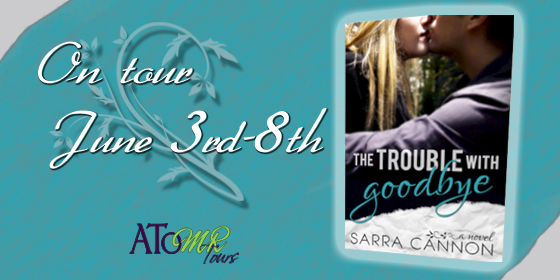 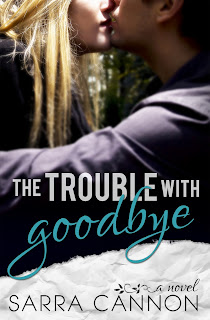 When Leigh Anne Davis landed a prestigious scholarship to an Ivy League school, she went against her parents' wishes and said goodbye to tiny Fairhope, Georgia and the wealthy boyfriend everyone expected her to marry. Now, two years later, she's back with her tail between her legs.

And a secret she wants to bury inside forever.

That's when Lucas Young enters her life. Everyone expects Leigh Anne to pick up right where she left off, but Lucas is different. Sure, he's been in some trouble in the past and seen his share of hard times, but he's the one person she can really be herself around.

The trouble is, being with Lucas would mean disappointing her family all over again. Will Leigh Anne give in to everyone's expectations? Or will she finally find the courage to follow her heart?

"Fresh tears hover at the edge, just waiting for the floodgates to open. I hold them back. I've cried too damn much lately. But like my tears I'm a girl on the edge. I hover at the top of some great height, peering over the side into nothingness. If I step back, I might lose myself forever. But if I inch forward I'm fucked. It's fly or die. And in this moment, I'm just not sure I'm the flying type."

Trouble with Goodbye was WONDERFUL! It is not your typical sugar-sweet heart warming romance, it's raw, gritty, and filled with secrets that slowly (some PAINFULLY slowly) reveal themselves throughout the entire course of the story.

Leigh Anne is making her way back to her small, podunk town for summer vacation from college in Boston. Even initially she has anxiety about returning after being away for two years, trying to sneak in town through the back roads in the middle of the night, but things go from bad to worse when she is suddenly in a horrible car accident. As a "happy" coincidence, Knox Warner just happened to be passing by and rescues her. From there Knox and Leigh Anne continue to run into each other in town and their connection is undeniable. But both Knox and Leigh Anne have their share of secrets, Leigh Anne trying to run away from hers in Boston and Knox dealing with being town pariah due to the rumors of his past. Leigh Anne considers herself to be broken beyond repair and thinks she's trying to protect Knox by trying to push him away, but she soon learns that he is her rescuer in more ways than one, and is exactly what she needs to face her demons and move on with her life.

Sarra Cannon does such a wonderful job at character development that it is amazing how much she creates so much love for certain characters and hate for others. Even though Knox comes from a very rough background, he is so sweet and caring with Leigh Anne, that you can't help but love him. And then there's Leigh Anne's mother, who comes from wealth and privilege but at times is so ugly and nasty to Leigh Anne you want to punch her straight through the book. I really liked that the secrets that were eluded to even in the very beginning were very slow to unravel, it kept the book interesting all the way to end. I also have a soft spot for the love interest in a book to be perceived as the bad boy of the town but he shows such a sweet, understanding side only those willing to see beyond the exterior (and in Knox's case, passed the rumors and harsh consequences of his tumultuous teenage years could have created a dark, rough young man but instead has given him a deeper understanding and appreciation for the kind of damage that can be done, and undone, with people who love you and want to help make things better). I loved that even though he had his own reasons to be hateful towards life, he puts Leigh Anne and her issues above himself to help her through. I would definitely say this book would be for NA+ readers. Although there is some graphic language and situations, I would say overall it is just more mature of a story, very emotion-pulling, and at points both heart wrenching and warming. I did like the ending, but I would have LOVED an epilogue maybe a couple years out. The story definitely wasn't lacking without it, I just wasn't ready for it to end.

Sarra Cannon grew up in a small town in Georgia where she learned that being popular always comes at a price. She is the author of the young adult paranormal Peachville High Demons series, which she first began self-publishing in October of 2010. Since the series began, Sarra has sold over 120,000 copies and recently signed a contract with Sea Lion Books to create a graphic novel adaptation of Beautiful Demons, the first book in the series.
Sarra lives in North Carolina with her amazing husband, her new baby boy, and her teeny tiny Pomeranian, Snickerdoodle.


Click here to visit the other stops on this tour!

Great review and giveaway! thank you.

I love the ending quote...so true

Great review! Can't wait to read this one :)

Great Review... can't wait to read this book. Thanks for the giveaway

Sounds like a great read! can't wait to get my hands on a copy. :)