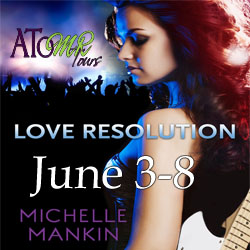 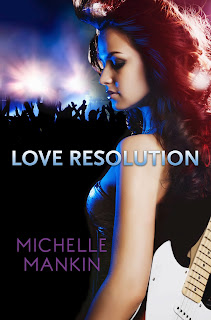 Brutal Strength is leaving Vancouver and heading out on a big stadium tour with reprobate rockers from Tempest as their opening act.

Meanwhile, Marcus must battle his own internal demons as well as this rival for Avery’s affection.

Can Avery and Marcus keep their fairy tale happily ever after together when the prevailing winds of the real world are against them?

Love Resolution is the third and final book in the Black Cat Records Shakespeare inspired trilogy.

3.25 Tentative Stars! Love Resolution was a fantastically emotional book! I was told it could be read as a standalone novel, so that's what I did. I DO NOT recommend that. I was confused and lost for some of the book. I had no clue who was what, or what everyone looked like. I had no clue until 3/4 of the book how Avery got into the band.. etc. I think I could easily raise the star count if I read the first two books then this one. Mankin is a wonderful writer, I love the duel povs, and the plot is very interesting.The angst in this book was definitely heart stopping because the story line was so realistic. The relationships that were fixed in this book was very heartwarming. And while this book has some sex scenes, I felt that they were hot while being genre (new adult) specific. Both of the MCs are likable and their love for one another is tangible. (Though some of the book you want to kick one of them in the nether-regions!) The best part was the song lyrics that were added to the book. They were fantastic.. the only bad thing is that I can't hear anyone sing them :(The story leaves us on a happy note and really wanting more at the same time!

Maybe there will be a rainbow at the end of this storm. Maybe I will get a miracle and maybe I won't. But my choice is to to be better not bitter.

Michelle Mankin is a young/new adult romance writer as well as a self-proclaimed giant... inside of her own mind!

For many years she worked in the insurance industry as an underwriter. Somehow, the boredom didn't kill her but the hour and hours of looking at facts and figures provided ample time for her mind to wander.

Love Evolution, Love Revolution, and Love Resolution are all part of the Black Cat Records trilogy using the plot underpinnings of Shakespeare combined with the drama, excitement, and indisputable sexiness of the rock 'n roll industry.

When she is not putting her daydreams down on paper, you can find her traveling the world, sometimes for real and sometimes for pretend as she takes the kids  back and forth to school.