Because of Lucy Book Blitz and Giveaway!! 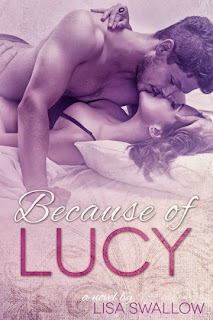 Ness’s parents are shocked when she turns down her place at Leeds University and takes on a full-time job in a call center. Determined to begin her adult life the way she wants, Ness moves to Leeds to live with her best friend Abby.

One night she meets Evan, who is everything she hates about guys. He may be hot but he’s also drunken, arrogant, and on top of that, he apparently has sex with girls and forgets about it. But Evan isn’t what he seems and Ness soon discovers they have more in common than she thought.

Evan is struggling to escape from his past too, and when Lucy appears she threatens his new relationship with Ness. Unsure if she can deal with the effect Lucy has on Evan, Ness makes a decision about her future which pulls them apart.

When their new lives don’t go as planned, Ness and Evan are both faced with difficult choices. All because of Lucy…

I side step the sink and turn. A guy leans against the doorframe, trying to appear nonchalant but his slackened stance indicates he’s attempting to keep himself upright. His brown hair is longer at the front and spills into his face, and unfocused brown eyes appear to be looking in my direction. He’s one of the regulars. I don’t pay a lot of attention, but he’s a good-looking guy and they never go unnoticed.
“Yes?” I snap. I’m so not in the mood.
His eyes sweep my figure. Unbelievable... I straighten my sleeves and look at him with an eyebrow raised.
“Are you Abby’s housemate?”
“Who are you?”
“Evan.” He rubs his nose. “You’re not a student?”
“Correct, I am the one not lying in a drunken haze on the floor contemplating my navel.”
Evan takes a step forward, steadying himself with one hand as my witty repartee sails over his head. “Why?”
“Why am I not on the floor pissed?”
“Why aren’t you a student?”
“Because I work instead.”
“Hmm.” He pauses and grasps onto the sink, searching for a glass. I pass him the spare one. “Did you fail?”
“Fail what?”
Evan fills the glass. “Or are you just not smart enough for uni? What is it you do?” He gulps the water in three mouthfuls then wipes his mouth with his hand.
Arrogant wanker.
“That’s right, I’m not smart enough. I’m living with Abby until I can find a nice man to marry then I can have 2.4 kids and a house in the suburbs. Because, as I’m not a student, I have no future.”
Evan leans against the sink. “Fair enough.”
Oh my god he believes me. How pissed is he exactly? “So, you think anyone who doesn’t go to university is inferior to you?” I demand.
I’ve seen her friends looking down their noses at me. Inverted snobbery. On top of that, the locals hate students and the students hate locals. I’m neither. I can’t win.
We’re close now and he stinks of alcohol and pot, a faint hint of deodorant lingering on his clothes. Evan’s T-shirt has come untucked and rides up as he leans against the sink. He’s toned, evidently works out. I can’t help myself, I check him out. Beneath his curls he has deep brown eyes. Incoherent eyes. I hate to admit, but something about him is seriously sexy.
Even if he is a dick.
“Well, if you’ll excuse me,” I say.
He sniggers.
“What’s funny?”
“You sound like the Queen.”
Not this again. I get enough crap at work. I move from Cheltenham to Yorkshire and suddenly I’m ‘stuck up home counties girl’.
I don’t dignify his comment with an answer and turn away from him, and walk out of the kitchen.
“Want me to get the guy out of your bed?” he calls after me.
I stop and look round. “You know him?”
“I could replace him.”
My mouth drops open at his arrogance. An attempt at a flirtatious smile plays around his lips but the unfocused eyes kill the effect he’s trying to achieve. He’s serious. I imagine he has a ready supply of eager girls. No surprise with a body and looks like his, such a shame he needs a personality transplant.
I step towards him. “Evan. I am not pissed. Nor are you getting into my bed. Good night.”
Feeling happy with my retort, I saunter towards the stairs. Behind me, Evan impersonates my sentence with an exaggerated posh accent.
It’s a good thing that I’m sober otherwise I’d go back there and punch him. 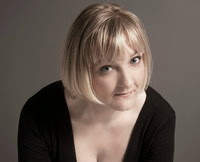 Lisa is originally from the UK but now lives in Perth, Western Australia. She splits her time between writing, raising a family and running a business. She even leaves the house occasionally.

Lisa writes romance and is currently working on a series of new adult paranormal romance novels, the first book, Soul Ties, was published in July 2013. She also writes new adult contemporary - Because of Lucy was released August 2013.