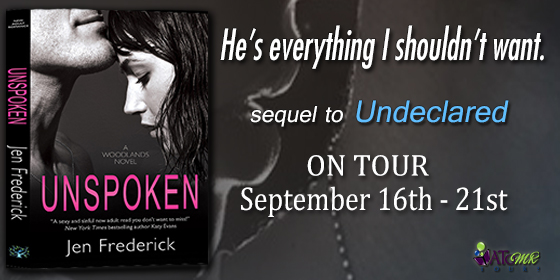 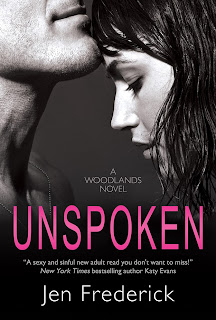 I've been called all these at Central College. One drunken night, one act of irresponsible behavior, and my reputation was ruined. Guys labeled me as easy and girls shied away. To cope, I stayed away from Central social life and away from Central men, so why is it that my new biology lab partner is so irresistible to me?

He's everything I shouldn't want. A former Marine involved in illegal fighting with a quick trigger temper and an easy smile for all the women. His fists aren't the danger to me, though, it's his charm. He's sliding his way into my heart and I'm afraid that he's going to be the one to break me.

I allow instinct to rule my behavior. If it feels good, do it, has been my motto because if I spend too much time thinking, I'll begin to remember exactly where I came from. At Central College, I've got fighting and I've got women and I thought I was satisfied until I met her.

She's everything I didn't realize I wanted and the more time I spend with her, the more I want her. But she's been hurt too much in the past and I don't want to be the one to break her. I know I should walk away, but I just can't. 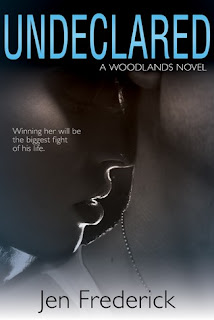 For four years, Grace Sullivan wrote to a Marine she never met, and fell in love. But when his deployment ended, so did the letters. Ever since that day, Grace has been coasting, academically and emotionally. The one thing she's decided? No way is Noah Jackson - or any man - ever going to break her heart again.

Noah has always known exactly what he wants out of life. Success. Stability. Control. That's why he joined the Marines and that's why he's fighting his way - literally - through college. Now that he's got the rest of his life on track, he has one last conquest: Grace Sullivan. But since he was the one who stopped writing, he knows that winning her back will be his biggest battle yet.

After reading Undeclared by Jen Frederick, I was excited for Unspoken and to get a better taste of Bo, Noah's best friend, fellow Marine and fighter. Bo is known around campus to be reckless, short tempered and a womanizer, but  women continued to flock to him. AM has been conditioned to keep her head down and general avoidance of all things on campus after a rough freshman year turned into vicious rumors following her around. When Bo and AM are paired as lab partners in Biology, let the witty banter begin! Although they are both physically attracted to each other, they both have their own internal hurdles to overcome creating obstacles for them to actually be together. AM has made a vow to not date any college guys and Bo doesn't think he is a good enough man to be with AM.

This book solidifies why I love duel POV's. I love getting the insight of what is going on that is left unspoken (no pun intended) between Bo and AM and Frederick does a fantastic job of creating two different vibes for each narrator. Bo is no doubt a man's man, military guy (at times borderline crude) type thought process, while with AM we see her tough exterior but feel her internal struggle with her insecurities and self detriment because of the rumors.

This story gets the extra bonus points for the secondary characters! I loved getting the check in from Noah and Grace, and AM's best friend, Ellie is classic (what's not to love about a girl who tells her best friend that they "need condoms for their hearts"!) I am looking forward to reading her story next. That is one benefit of reading a series with each book following a different set of characters from the same social circle, we get little tastes of all of them in all the stories and it gives the author that extra motivation to create depth with secondary characters as well as the main. This would definitely fall under the New Adult category, I would officially classify it as SUPER HOT!

Jen Frederick lives with her husband, child, and one rambunctious dog.  She's been reading stories all her life but never imagined writing one of her own. Jen loves to hear from readers so drop her a line at jensfrederick@gmail.com.

Click here to visit the other stops on the tour!

Looks like a nice read. Thank you for the opportunity :)

I haven't read any in this series yet! Will have to add to my tbr!

Thanks for the great giveaway chance! This book sounds great! I'll be adding to my TBR.

I haven't read these yet, but they are on my TBR list. great giveaway!

Looks like a fantastic read, thanks for the great giveaway!

Thanks for the giveaway, looks like a good book.

Loved the blurb and great review. This sounds like a wonderful love story and a great read. Thanks for the chance on this giveaway.

Loved your blurb....thanks for the giveaway :)

I would love to read this ! It looks like a wonderful read.

I am looking forward to reading this! Thank you so much for the amazing giveaway!

Military love story.. one can't go wrong with that.. something so amazing about long distance.. eerie of not meeting but I hear it works .. ;) Can't wait to read.

Unspoken sounds really good. I'm excited to read it, putting on my TBR list. Thanks for the chance to win!! Would love an Ipad mini!!!!

Love the blurb, looking forward to reading it!

Thanks for the giveaway!!!

Thanks for the giveaway :D

add it the TBR, would love to read it.

Thanks for the chance!

Thank you for this Awesome give away iPad Mini