The Edge of Never Tour and Giveaway

Twenty-year-old Camryn Bennett had always been one to think out-of-the-box, who knew she wanted something more in life than following the same repetitive patterns and growing old with the same repetitive life story. And she thought that her life was going in the right direction until everything fell apart.

Determined not to dwell on the negative and push forward, Camryn is set to move in with her best friend and plans to start a new job. But after an unexpected night at the hottest club in downtown Raleigh, North Carolina, she makes the ultimate decision to leave the only life she’s ever known, far behind.

With a purse, a cell phone and a small bag with a few necessities, Camryn, with absolutely no direction or purpose boards a Greyhound bus alone and sets out to find herself. What she finds is a guy named Andrew Parrish, someone not so very different from her and who harbors his own dark secrets. But Camryn swore never to let down her walls again. And she vowed never to fall in love.

But with Andrew, Camryn finds herself doing a lot of things she never thought she’d do. He shows her what it’s really like to live out-of-the-box and to give in to her deepest, darkest desires. On their sporadic road-trip he becomes the center of her exciting and daring new life, pulling love and lust and emotion out of her in ways she never imagined possible. But will Andrew’s dark secret push them inseparably together, or tear them completely apart?


Due to sexual content and language, this book is recommended for 17+ – Adult Contemporary Women’s – New Adult Fiction

TEON was a fantastic-wonderful book. This was an excellent and highly relatable contemporary. I loved Camryn and Andrew's story, their chemistry, and their adventure. This book has everything you could want.. it's heartfelt, hilarious, sexy, intense and emotional. It was a bit slow to start, but the final product was just WOW. I expect this book will be up there with the likes of Easy and Slammed so if you like those books you'd definitely like this one!
Side note: Shame on you for messing with my emotions like that J.A. Redmerski!!! Oh and I love-love the Civil Wars, and listened to their album while I was reading the last half of this book!
Cover Love and Writing
I really like the cover, it is topic related and resembles the main character of the book. It is a bit mysterious while still being sexy. The writing is great and the story is told in the first person from Cam and Andrew's POV. (which I love!!!)
Main Character
Camryn's last few years have been filled with nothing but loss. She finally reaches her breaking point when her and Natalie (her BFF) get into an argument. With no one left in her life, Camryn decides to hit the road. I can so relate to her despair and reluctance to let someone else in. There's only so much grief your heart can take.
Swoonworthy points: 9.5
Boy-o-boy did this book ever have a swoon factor! There's no way in hell that you couldn't fall in love with Andrew. He is protective, charming, funny, smart, oh.. yeah.. and sexy as all get out! He listens to Rock music, plays the guitar, and can be so sweet. On the road trip you get to know and love him.
Added to the romance is some heat! There is a lot of sexual frustration between them. Andrew's got a secret, one that he knows will hurt her, but he can't deny their attraction though he tries very hard.
Bonus Points: +1
I have never in my life laughed so hard at a particular scene than I did when Andrew and Cam were in Walmart. That is the point in which I fell head over heals in love with this book... a true "ROFLMAO" moment.
Read that scene here!
Random quote:
I absolutely fucking melt when she looks up at me like that. How would I ever say no to her? Whether it was about sleeping next to a pole of cow shit or under a bridge overpass next to a homeless drunk- I would sleep anywhere with her. 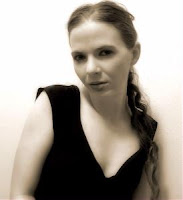 Author of THE DARKWOODS TRILOGY and DIRTY EDEN, mother, werewolf & zombie fanatic, book addict and a happy hermit obsessed with the Universe. Oh, and AMC’s “The Walking Dead”.
Addictions: Starbucks every morning, trolling Barnes & Noble’s shelves once a week, detesting winter, shopping flea markets and preparing for the collapse of society as we know it. Do I own a tin foil hat? Maybe. :-)
I was born in Arkansas and have lived here most of my life, except the couple of times when I lived in Pennsylvania. I started my first novel at the age of thirteen and have been writing something ever since. Generally, I love characters in life and on paper. I pay attention to people, especially those whose personalities make them different from the rest of us: the drug addict roaming the Laundromat that talks to himself, the young, inattentive mother in the park with the meanest kid on the playground – (the entire cast of ‘Swamp People’) – characters fascinate me and I hope that it shows in my literary work.

Thanks so much for participating in my tour, Ashley! Glad you loved the book! :-)

Great review, Ashley! I'm not big on contemporaries, but I added this one to my TBR list! Thanks so much! :D

I've been waiting for my library to get this book for soooo long. Everyone just seems to be in love with this one. Great review!

I've heard so many great things about this book! Love J.A. Redmerski's The Mayfair Moon ~ can't wait to get my hands on this one :)