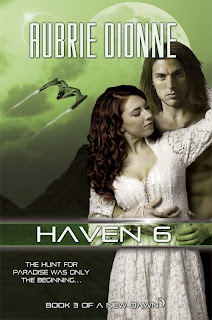 Haven 6 Blurb:
A product of an illegal pairing, Eridani is the only woman without a lifemate aboard the colonization ship, the Heritage, and she is determined her less than perfect DNA will not get in the way of finding love. As the ship nears it's final destination of Haven 6 after five hundred years of travel, images of the surface show evidence of intelligent life on a planet that's supposed to be uninhabited. Commander Grier assigns Eri to the exploratory team to spy on the alien society and return with information on how to defeat them.

When Eri's team lands, tribes of humans attack and Eri is saved by Striver, the descendant of a colonist and a pirate from Old Earth's colonization efforts in other parts of the galaxy. Striver helps Eri rescue her team and they are drawn to each other despite their different allegiances. While Striver battles with trusting Eri, Eri must decide whether to warn him and his people about the commander's intentions, or follow orders and complete her mission.


Eri, thank you for joining me!
Thank you for having me. I’ve had so much happen in the last few months, it will be good to talk about it. Our colony has had so much change, and a lot of it is because of me.
Let’s start with the beginning of your tale.  Describe a day in your life on the New Dawn.
I worked in the most boring job ever on the Heritage, my colony ship.  I was a linguist, so I studied all of Old Earth’s dead languages. Why the commander had me do this? I have no clue. Maybe just to keep me busy, because they didn’t know what else to do with a product of an illegal pairing. Anyway, I’m over it. My linguist skills actually came in handy on Haven 6, because I was able to decipher the meaning behind the mysterious golden liquid that people have been disappearing into ever since the space pirates landed on the planet.
Why was it so important for you to report back to the commander?
When she assigned me to the exploratory team, I finally felt like I could prove to her I was worth something, even if I was illegally conceived. I wanted to make my family proud and do my job. Little did I know my mission would get in the way of the one person I’d come to love.
What were your initial thought/fears when you landed on Haven 6?
The “aliens” scared me the most. Who were they? Were they peaceful? Could I really use my skills to talk with them? As you read in Haven 6, the exploratory mission did not go as planned. I’m lucky to still be alive.
In one sentence, what were your first impressions of Striver?
Athletic, gorgeous, and determined. I can still picture him running to save my team. *sigh*
If you could exact your revenge on Weaver for what he did to you, what would it be?
Because of the way things went down, I have no ill will towards Weaver. He showed me his true self at the very end. I hope, wherever he is, that he finally finds happiness.
Thanks again for joining me, Eri!  This has been a real treat!
Thank you for having me. Make sure you always have the courage to follow your dreams, however ridiculous they may seem and be true to yourself. 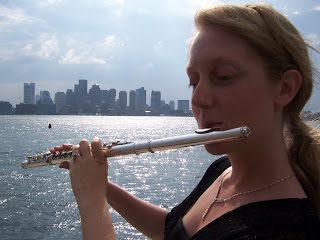 Aubrie grew up watching the original Star Wars movies over and over again until she could recite and reenact every single scene in her backyard. She also loved The Goonies, Star Trek the Next Generation-favorite character was Data by far-, and Indiana Jones. But, her all time favorite movie was The Last Unicorn. She still wonders why the unicorn decided to change back to a unicorn in the end.
Aubrie wrote in her junior high yearbook that she wanted to be "A concert flutist" when she grew up. When she made that happen, she decided one career was not enough and embarked as a fantasy, sci fi author. Two careers seems to keep her busy. For now. 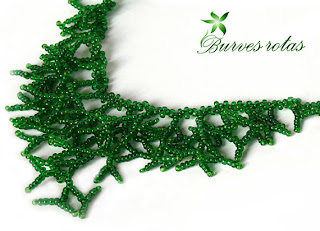 I haven't seen this before, but it is sounds really fascinating. Thank you for sharing it.

Haven 6 is awesome! A perfect end to a great series.

Wow this book is new to me but from the synopsis I'm intrigued!! thanks for visiting my WoW :D

I haven't heard of this one. I like your blog background a lot. Thanks for following!

Ooh intriguing. I haven't heard of this one before, but it sounds really good. Thanks for bringing it to my attention.

I also love your background. Thanks for stopping by.

~Danica Page
Taking it One Page at a Time